Sandra Horning, of Chaplin, Connecticut, is the author of three children’s books:  The Biggest Pumpkin, a picture book illustrated by Holly Stone-Barker and due out later this year; Chicks!, a beginning reader illustrated by Jon Goodell and published by Random House in 2013; and The Giant Hug, a picture book illustrated by Valeri Gorbachev and published by Knopf in 2005.  The Giant Hug won several awards and has been translated into Dutch, Italian, Chinese, Korean and Japanese.

Ms. Horning is studying the Papers of James Marshall to support the completion of a new beginning reader with the working title Crab and Snail.  She is researching word choice and length, Marshall’s revision process and his creative process from the first idea to publication.  This is Ms. Horning’s first of three blog posts in fulfillment of the Marshall Fellowship.  Welcome, Sandra!

Most people think of James Marshall as an illustrator and vividly remember his characters, George and Martha, Miss Nelson, and Fox, among others, but I, as a children’s author myself, think of his words and how well crafted his stories are.  Since he wrote many of his stories under the name Edward Marshall, there may be people who don’t realize the large number of stories he wrote and illustrated. I’m thrilled to now have an opportunity to research how James Marshall may have created such memorable stories and characters.

As I dig into the collection, which is quite vast, I’ve been looking at story plots and character development, but Marshall’s endings are what keep jumping out. One of the reasons his books can be read over and over again is that his endings are always satisfying and funny. Since I am currently in the midst of writing a beginning reader, for the last few weeks I’ve been closely looking through drafts and dummies of Marshall’s beginning reader stories of Fox. I’ve noted several times how Marshall made a small comment in the margin near the ending: “Funnier ending” and “Make better.” When I compare the dummy to the final version in print, indeed, Marshall has always made a change to a better and funnier ending, just as he noted.

For example, in the story “Monday Morning” in the book Fox All Week, Fox jumps out of bed eager for the school field trip. When he looks out the window it is pouring down rain. He says, “This isn’t funny.” Fox is sure the field trip will be canceled and it will be school as usual. He then pretends to be sick so he can skip school.  Reading comics and having his mom wait on him, Fox is having a great time in bed when he hears voices outside his window. The last page of the story reads,

It was Miss Moon and the class.

“We are off on our field trip!” called out Carmen.

Marshall had many different lines ending the story: 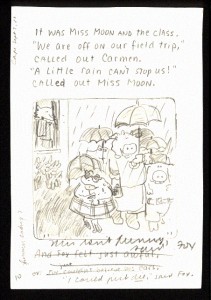 A page from the dummy for the story “Monday Morning’ in  James Marshall’s book Fox All Week. Note “funnier ending?”  in the margin above the number 10. (James Marshall Papers:Box 7:Folder 131).  All rights reserved.  No reproduction of any kind allowed.

The ending in the final version is “This isn’t funny,” said Fox.  It is simple and subtle, and it ties into the beginning of the story, repeating Fox’s line when he thought the rain canceled the trip. It lets the reader know how Fox felt without saying it. It assumes the reader has the ability to get the understatement and humor.

In another story, “The Friday Dinner,” from the same book, Fox’s mother burns the dinner. Fox steps in and announces that he will make dinner. Then he clears everyone out of the kitchen. The reader hears Fox banging pots and pans. The last page of the dummy reads,

When dinner was served it was simply delicious.

The last page as it was printed reads:

In my final and favorite example, “Tuesday’s Lunch,” again from the same book, Fox and his friends are sick of the tuna sandwiches their mothers give them for lunch. They decide to teach their moms a lesson and throw the sandwiches over the schoolyard wall. Of course, later they are hungry and unhappy. As they leave school, the dummy with “Make Better” in the margins ends with the following:

On the way home Fox and his friends met a poor old cat.

“You look hungry,” said the cat.

And they ate every bite. 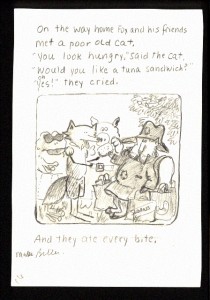 A page from the dummy for the story “Tuesday’s Lunch” in  James Marshall’s book Fox All Week. Note the “Make better” at the end of the text. (James Marshall Papers:Box 7:Folder 131).  All rights reserved.  No reproduction of any kind allowed.

Below is the ending in print:

On the other side of the wall they met a poor cat.

“A nice lunch fell from the sky.”

Once again, Marshall successfully made a better and funnier ending, one with additional meaning. Fox and his friends were not too bright when they decided to throw out their tuna sandwiches. The line “Kids are really smart these days.” adds an ironic note to the humor.

So what is the secret behind his perfect endings? I think the secret is that Marshall trusts that the child reader is intelligent enough to understand the humor without spelling it out in a didactic way.  Children love to be in on a joke. Books with great endings are the books children remember and read again. This has led me to review some of my unpublished manuscript endings. Reading through them, I am taking a lesson from James Marshall and writing “Make better” and “Make funnier” next to my endings that need it! And, of course, I will keep in mind what Marshall himself stated: “Kids are really smart these days.”