Anna Zarra Aldrich is majoring in English, political science and journalism at the University of Connecticut.  She is a student writing intern studying historical feminist publications from the collections of Archives and Special Collections. The following guest post is one in a series to be published throughout the Spring 2018 semester.

During the 1960s and 1970s feminist writers established themselves with a distinct and demanding voice. In order to accomplish the feat of integrating a prominent female presence into the literary world, women created and utilized exclusively female publishing mediums. Women took to using alternative methods that allowed them to cultivate this unique literary culture outside the realm of the traditionally male-dominated publishing world.

In 1985, noted librarian and author Celeste West published a book titled “Words in Our Pockets: The Feminist Writers’ Guild handbook on how to gain power, get published & get paid.” The book provided an in-depth look at the publishing world through a feminist lens and provided women with resources and options for alternative paths to publication.

The cover of the book depicts a woman’s portrait composed of the words of a poem by Denise Levertov’s from which the book gets its title. It reads: “But for us the road/ unfurls itself, we count the/words in our pockets.”

The introduction of the book states that, “The present wave of feminism is…creating a women’s cultural renaissance, the first since matrifocal times. At last, we are building, in large numbers, our own literary tradition, finding our own audience, and from these, shaping a world view.”

This book emphasizes the fact that many of the most influential members of the movement have been writers who use the power of the written word to express the urgency and necessity of the changes they demanded.

West’s book begs the question: “Who among us can afford silence?” West wanted to encourage women to make their voices heard through the literary mire that was oversaturated with male perspectives.

The book goes through a basic how to process for practical elements of publication including writing proposals, making sense of the legal jargon in contracts and financing options. The book also deals with the sexism of the industry. The book provides advice on how to deal with people, namely powerful men, who refuse to take women writers seriously and list feminist publishers and a guide on self-publishing as a means to circumvent discouraging male publishers.

“You are a writer, not a wallflower. Why wait for some gentleman publisher to sweep you into his arms and carry you off to the Big House?” West proposes.

In an article published in the summer 1979 issue of “Chrysalis” magazine, West wrote “Book publishing, like all industries, is controlled by rich, white, heterosexual men. To retain this power, their books naturally reinstate status quo attitudes of privilege and discrimination.”

The article cites the figure that 70 percent of books published were produced by 3.3 percent of the over 6000 publishing houses that existed at the time. West calls independent, alternative press outlets “the slice of tomorrow.” 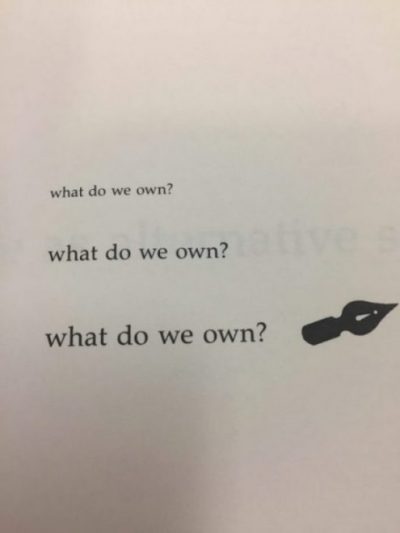 The book’s engagement with the challenges female writers faced showed that even as women encouraged each other to write, the established system often operated to keep them excluded. This created a space for female-run literary publications that provided a platform for women writers who were not welcomed into traditional literary circles.

“Aphra” was an feminist literary magazine published quarterly from 1969 to 1976 out of New York City. The magazine got its namesake from the pioneering English poet, playwright and author Aphra Behn (1640-1689) who was the first woman known to have earned her living by writing.

“Aphra’s” mission statement was “Free women thinking, doing, being.” In the preamble to their first edition, the editors state that the purpose of the magazine is to provide women with an outlet to express themselves: “We submit that one reason for the form of the current upsurge in feminism…is that the mass media provides such biased and commercially oriented material. The literary and entertainment scene are dominated by male stereotypes, male fantasies, male wish fulfillment, a male power structure,” echoing West’s complaints.

The magazine was a clear response to the male domination of the literary field in contemporary American society and historically. Each issue contained a collection of “Aphra-isms” which were quotes from feminist figures such as Mary Wollstonecraft, Sojourner Truth and more modern feminists like Kate Millet. The section also featured historical and modern examples of sexism from literature and the news.

“Aphra” published work from a variety of authors, including Margaret Atwood and Alice Walker, who each provided a unique take on feminist issues of the day yet they all had an underlying tone that was unapologetic and focused on confronting the problems they observed in society.

In a short story by one of the magazine’s editors, Elizabeth Fisher, titled “My Wife,” she explores the downside of the sexual revolution which allowed and encouraged women to enjoy the sensual pleasures of sex. The story is told from the perspective of a man who believes he has the honor of sexually awakening his future wife. The man becomes disenchanted with his wife soon after they are married and her body changes as a result of her pregnancies and their sex life naturally dwindles. The kicker of the story is the conclusion when the husband overhears his wife admitting to a friend that she faked every single orgasm he thought she had had with him. This sends the narrator into a devastating existential crisis as his fragile male sexual ego is absolutely destroyed.

“I look at the children. They’re my daughters, but they’re hers too. Will they, too, grow up to betray me and their husbands, a man’s whole raison d’etre?…There’s nothing left. How can I live now, how can I go on?”

This desperate conclusion to the story shows how a female writer revealed the negative side of the sexual revolution. Since women were now allowed to admit they enjoy sex, they were expected to. Despite this revolution in sexual philosophy and the growing availability of a variety of birth control methods, male views of sex remained chauvinistic and self-centered. The narrator displays a kind of toxic masculinity that created a culture in which women felt obligated to fake orgasms and feign pleasure. These women felt they had to play the role of the sexually liberated woman even when reality remained stalled in antiquated sexual attitudes that prioritized male sexuality and pleasure.

An unsigned editorial in the second issue of the magazine addresses the difficulties the second-wave feminist movement faces in terms of measurable accomplishments. The first iteration of the women’s movement in the early 20th century was focused primarily on women’s suffrage. The passage of the 19th amendment in 1920 was a clear victory for the movement and led to its dormancy for the next forty years. The goals of feminists in the 1960s, aside from fighting to achieve the passage of the Equal Rights Amendment, were geared toward largescale social change. The author of the editorial astutely observes that, “It is an aim which all too often proves illusory since you can’t legislate orgasm — produce it by fiat, despite all the promises which seem to say, ‘Let there be orgasm!’” 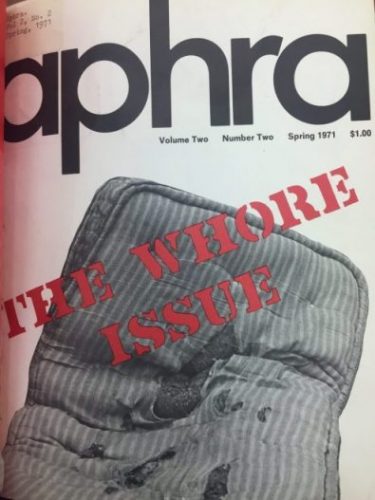 In the spring of 1971, “Aphra” had a special “Whore Issue”. This issue dealt with problems of women being condemned for sexual promiscuity as well as the exploitation of women as sex workers.

An editorial by Fisher argues that the problem with sex is that it has been made into a commodity. Women are defined by their sexual relationship with men as a wife, a mother, a mistress or a whore. Fisher writes that by viewing sex in these terms, female pleasure is devalued and the woman is transformed into a dehumanized sex object.

While “Aphra” was primarily a literary journal, through Fisher’s editorial leadership it engaged questions of the sexist nature of sex. Fisher also wrote repeatedly on the role of men in procreation, which had recently become optional given advancements in invitro fertilization.

A similarly satirical take on issues of sexual freedom can be found in a 1973 issue of another feminist literary magazine, “Velvet Glove.” A story by Susan Watkins follows a woman working in a pharmacy who is required to inquire if a customer is married before she is allowed to sell them contraception. The female protagonist asks her condescending male manager if people could not just easily lie and he tells her she must ask anyway in compliance with the law. The protagonist’s retort is to wonder if she should also be required to ask young women buying menstrual products if they’re 12-years old. This story is another example of satirical writing which was clearly a way feminists saw fit to combat the social ills they observed.

Feminist have long been thought of as humorless and in modern times many even refer to them as “feminazis.” While much of the work published in literary journals like “Aphra” and “Velvet Glove” is of a serious nature, it also provides women with a platform to express a brand of humor that would not have been well-received by a male audience.

Even “Words in our Pockets” participates in this emergence of a female comedic culture as the copyright information on the inside of their front cover warns readers that “a Surveillance MicroblastchipTM embedded in this spine will blow you to bits in the event of unauthorized copying.”

When women were writing to and for other women, they embraced the satirical and humorous side of the movement. Women could rarely do this publicly for fear of being dismissed as frivolous; but women’s publications provided women with an outlet for their special brand of ingroup feminist humor.

Women began working their way into the literary world earnestly and consciously during the 1960s and have not turned back since. In 1960 only 24 percent of the books that landed on the New York Times Bestseller List were written by women. That number fluctuated each year but never rose above 40 percent until 1992. Since then, the gender divide has been roughly equal, though never exceeding 50 percent. It is not a stretch to say that publications like the ones described here have helped establish the feminist literary tradition that has allowed modern female writers to have much more proportional representation in the field.

“Words in our Pockets” ends on a poignant and unmistakably optimistic note. The second to last page contains the words “The End.” When the reader turns the page, she reads: “The statement on the other side of this page is false.” And clearly, that latter statement was correct.