Anna Zarra Aldrich is majoring in English, political science and journalism at the University of Connecticut.  Anna is a student writing intern studying historical feminist publications from the collections of Archives and Special Collections. The following guest post is one in a series to be published throughout the Spring 2018 semester.

In February of 1970 a terrorist group took over a prominent underground newspaper in New York.

The Women’s International Terrorist Conspiracy from Hell (W.I.T.C.H.), a direct-action political group, along with several other women’s groups and female “RAT” staffers took over the newspaper for what was supposed to be a single, token issue of the paper. The headline on this issue read, “Women Seize RAT! Sabotage Tales!” 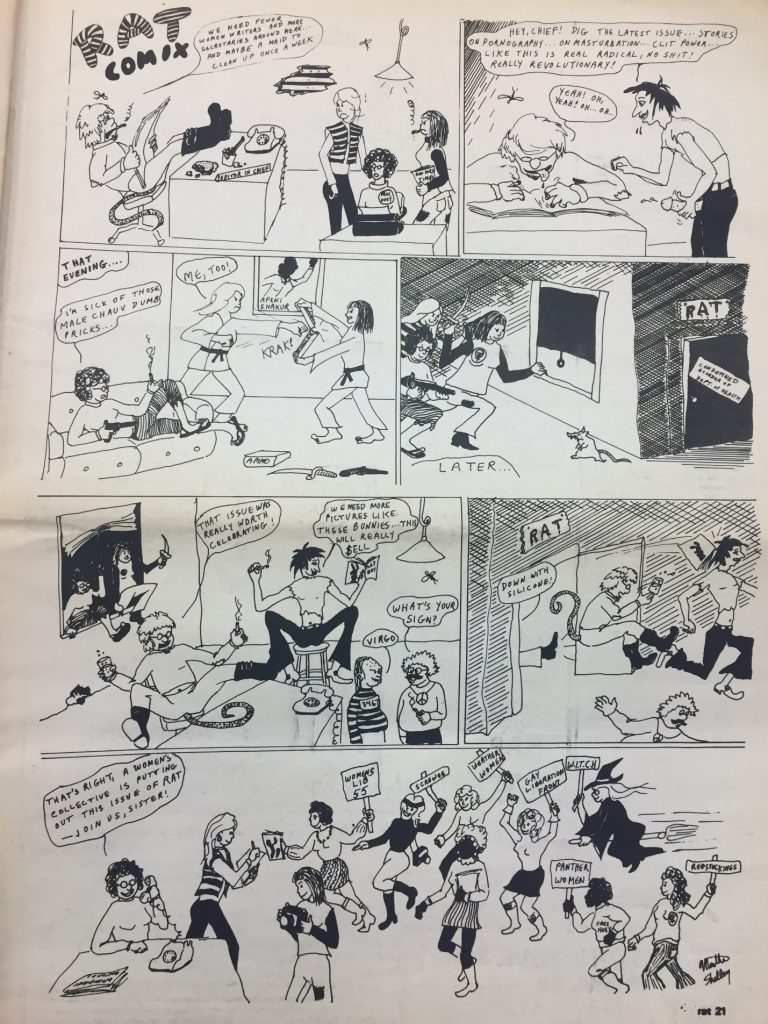 This comic, published in the women’s issue of RAT illustrates the takeover which was enabled by numerous women’s groups including W.I.T.C.H.

The women’s issue featured an essay by Robin Morgan, an American writer and noted feminist activist, titled “Goodbye to All That.” The essay sharply criticizes the advertisements using photos of women that bordered on pornographic and the continual exclusion of a feminist viewpoint from the paper.

“We have met the enemy and he’s our friend. And dangerous,” Morgan wrote.

Morgan’s article rallied against the white, male domination of the radical anti-war/anti-establishment movement. She said, “Goodbye, goodbye. To hell with the simplistic notion that automatic freedom for women – or nonwhite peoples – will come about zap! with the advent of a socialist revolution. Bullshit.”

Grievances against male radicals were common among feminist writers during this period. A pamphlet written by Andrea Dworkin in 1973 titled “Marx and Gandhi Were Liberals” stated that men permitted women to take part in their vision of the revolution so long as they kept their own demands moderated and subsumed within the male-dominated agenda.

“Liberal gestures of good will are made when we are shrill enough or when we are fashionable enough as long as we do not interfere with the ‘real revolution.’ Increasingly we understood that we are the real revolution,” Dworkin wrote.

The January 25-February 9, 1970 issue of “RAT,” the last one published by the male editorial staff, included numerous articles on pornography and masturbation. An article by Uncle Leon Gussow argued that pornography gives young men unrealistic views of sex and creates a separation between him and the act of sex. The women who worked at “RAT” took issue with how this topic was approached by the male staff; they believed this article, and the paper in general for quite some time, promoted pornography. Many women saw pornography as problematic as it often portrayed violence against women and this became a major issue in the women’s liberation movement.

The women also disliked the fact that the tongue-in-cheek titles that appeared on the masthead of each issue were often demeaning and stereotypical to women, referring to them as “princess” or “muffin purchaser.” 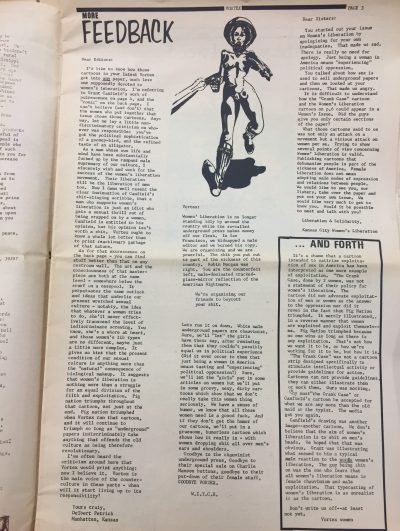 The Feedback Page of “Vortex” following the Women’s Lib issue

After the women of “RAT” published their issue they were loath to return control to the men who had been running the paper since its inception in 1968. So they didn’t.

In the next issue, the women still made up the entirety of the editorial staff, but some men came back temporarily as production staffers to ease the transition. In a letter to the readers, the editors said they were trying to “work it out” with the men. All male staff members were eventually asked to leave the paper and control remained in exclusively female hands.

A letter to the readers from former editor Paul Simon explained that after a “stormy” meeting between the men and women of the paper, it was decided that the paper would continue to be published by the women.

The takeover at “RAT” inspired women working at other papers across the country to follow suit. In the April 4, 1970 issue of “Vortex,” an underground paper published out of Lawrence, Kansas, W.I.T.C.H. wrote a letter to the paper saying, “you are a counterfeit left male-dominated cracked-glass-mirror reflection of the American nightmare.” The letter said the group was preparing to organize a boycott of the paper.

This letter was published in the issue of the paper following issue on the women’s liberation similar to the one that initiated the permanent takeover of “RAT.” In September of that same year, “Vortex” moved to a collective model of publication. This altered the existing editorial structure at the paper and gave women a larger say in its production beyond their single issue which, unfortunately is not available at the Dodd Center Archives.

“RAT” continued its coverage of issues like the Vietnam War and the trial of the 21 members of the Black Panther Party who were charged with coordinating attacks on a series of New York City buildings. However, the new editors made sure to make women’s issues and the accomplishments of female activists more prominent. 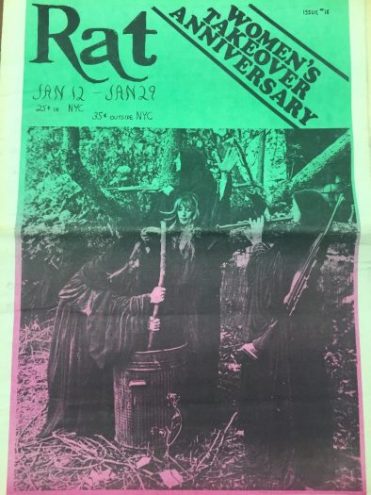 The cover of the January 12, 1971 issue celebrated the anniversary of the women’s takeover of “RAT”

They featured letters from Mary Moylan, one of the Cantonsville Nine, a group of activists who burned draft files to protest the war. Moylan went underground, hiding from the authorities for a period and her letters about her time underground were published in “RAT” and other publications like the women-run “Off Our Backs.” “RAT” also featured articles about women’s role in the Israeli-Palestine conflict.

In March of 1971, the paper changed its name to the Women’s LibeRATion.

One thing the women sought to dissemble with their takeover was the hierarchical structure that had allowed men to squelch their voices for so long. This led them to establish a newsroom that was much more free-flowing and less rigidly structured. In a letter to the readers, the editors describe the RAT work collective’s meetings as “un-chaired and chaotic.”

The paper continued publishing with relative consistency through 1972 and then stopped abruptly for several months. Then, in April of that year, a newsletter came out.

The single printed sheet explained to readers that the fate of “RAT” was in limbo due to internal fractionalization. A group of six black gay women had seized control of the paper after airing their grievances against the white feminist viewpoint that had been almost exclusively featured by the paper.

The black women writing the article said there were too many fundamental misunderstandings between the white and third-world women in the movement to be reconciled into a cohesive vision in which all voices could be heard. 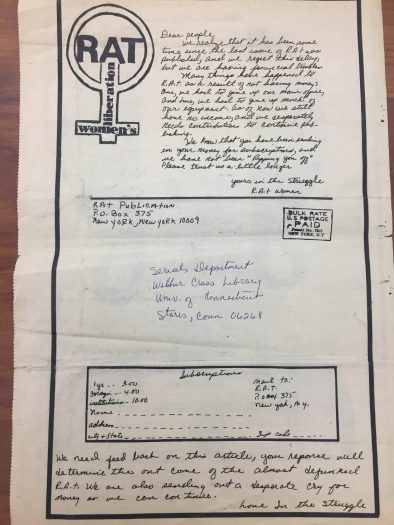 The newsletter closed with a request for feedback from readers, “Your responses will determine the outcome of the almost defunded ‘RAT;”. The paper also asked for monetary donations to help keep the presses running.

Unfortunately, it appears these women were unable to keep the paper afloat either due to a lack of interest or lack of funds.

The downfall of “RAT” showcases the lack of an understanding of the idea of intersectional feminism during this time. Perhaps it also demonstrates a lack of will on the part of white feminists to create connections with minority women and engage in meaningful dialogue to understand their issues. Minority voices were not generally included in the more-prominent feminist outlets, or if they were given a space, it was still through the good graces of white editorial staffs. This is an unfortunate truth that the feminist movement continues to grapple with today.