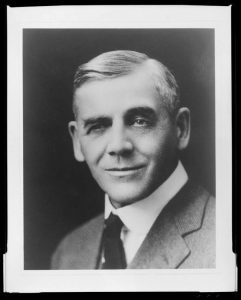 Charles Lewis Beach was born in Whitewater, Wisconsin in 1866, graduated from the University of Wisconsin in 1886, and came to the Connecticut Agricultural College as an instructor in Dairy Husbandry in 1896. He stayed with the college until 1904 when he then went to the University of Vermont, but returned to Storrs in 1908 to take the position of the CAC’s 4th President, a role in which he served until 1928.

Under Beach’s leadership the CAC grew and prospered. In 1908 the college had just 165 students enrolled; by 1928 there were 518 student enrolled. Beach sought to increase the number of women enrolled so in the same approximate time period the number of women students grew to 133 from 22. In 1908 there were 18 bachelor degrees granted; by 1924 that number increased to 78. Beach recognized that the growth of the college depended upon increased funding from the state, and, as Walter Stemmons wrote in his book Connecticut Agricultural College – A History, “Beach compelled a reluctant State to take pride in its college.”

Other initiatives under President Beach included an expanded curriculum that included courses in the liberal arts, a fairly radical idea for a college with such deep roots in the study of agriculture. He believed that “students graduating from the college [go] into the world equipped not only to be efficient farmers but also to be understanding individuals” as is written in his obituary. 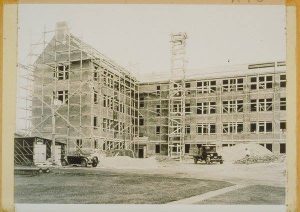 Beach Hall is, of course, named in his honor. Built in 1927 for $343,000, it was originally used as an administrative building and held the library and science classrooms. An extensive renovation of the building was done in the 1970s.

You can find more information about the life of Charles Lewis Beach in this profile of him in our digital repository at Conecticut Digital Archive.