Anna Zarra Aldrich is majoring in English, political science and journalism at the University of Connecticut.  As a student writing intern, Anna is studying historical feminist publications from the collections of Archives and Special Collections. The following guest post is one in a series to be published throughout Spring 2018.

The feminist movement has long struggled with incorporating different groups’ concerns and modes of oppression into the movement. This problem was exacerbated by the multifaceted, turbulent U.S. political atmosphere that characterized the 1960s and 1970s.

“Chrysalis,” a quarterly women’s periodical that was self-published in Los Angeles from 1976-1980, struggled to incorporate African American women’s issues into its editors’ ideals for the movement. In an issue of the magazine that came out in spring of 1979, poet Adrienne Rich wrote an article called “Disloyal to Civilization: Feminism, Racism and Gynophobia.” 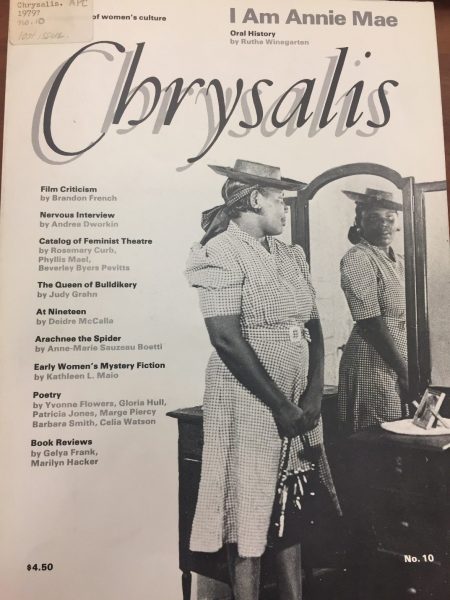 “Chrysalis’s” article sharing the story of Annie Mae was a clear attempt to give a black woman a voice in the publication.

Rich’s article emphasized some of the inherent similarities between the struggles of black people and women in America. She wrote that all women and all black people in this country live in fear of violence being committed against them solely due to their gender or race without the hope of justice being served.

Her article went on to explain that dividing women against each other has historically been a means by which men have maintained their oppression: “The polarization of black women in American life is clearly reflected in a historical method which, if it does not dismiss all of us altogether or subsume us vaguely under ‘mankind,’ has kept us in separate volumes or separate essays in the same volume.”

Rich urged women that they “can’t keep skimming the surface” of the women’s movement by refusing to engage with black women’s issues.

“Chrysalis’s” winter 1980 issue featured a story called “I am Annie Mae” which was the story of Annie Mae Hunt, a 70-year old black woman from Texas. Annie Mae’s story was told through a transcript of hours of interviews.

Annie Mae’s story shared the hardships of her life, including her dropping out of school after fifth grade, getting married and having her first child when she was only 15. Annie Mae was pregnant a total of 13 times in her life and had six living children at the time of the article’s publication. Annie Mae said she was never educated about birth control and was told having more children was better for her.

“Birth control – that wasn’t in the makings then. I mean the black people didn’t know it. Poor people like me. There may have been some well-to-do people that knew about it,” Hunt said.

While this article was an earnest effort by “Chrysalis” to tell the story and plights of a woman of color, it was only through a white mouthpiece that Annie Mae was able to share her story; the reporter who conducted and organized the interviews was white as was the staff and, presumably, much of the magazine’s readership. Furthermore, aside from Rich’s essay and this article, examples of “Chrysalis” covering women of color’s issues are sparse.

“Off Our Backs,” a bi-weekly newspaper printed in Washington D.C. (1970-2008) did put forth a more valiant effort to communicate the struggles of black women in America through their own voices even if they often fell short of true intersectional understanding.

In the April 15, 1971 issue of “Off Our Backs” an unnamed black woman, identified as someone who held a “high position in the Health, Education and Welfare Department,” was interviewed about her response to the women’s liberation. She pointed out at that at time the women’s movement was predominantly led by and composed of white, middle class women. She said that black women do not want to be a part of what they considered to be a, frankly, racist movement. 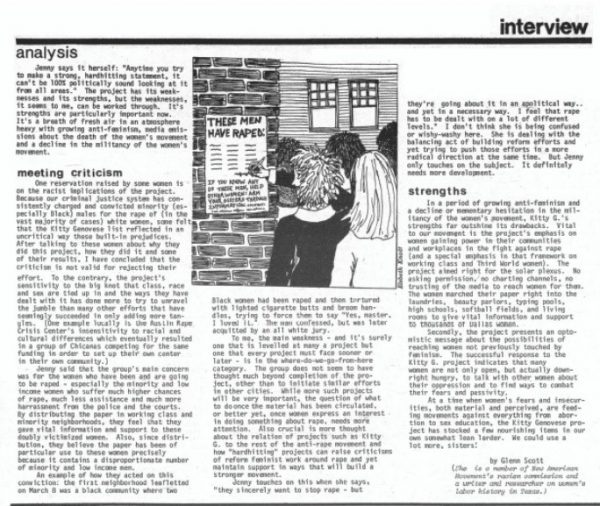 In their article on the Kitty Genovese Women’s Project, “Off Our Backs,” asks directly about this criticism of racial bias.

The 1960s and 70s were a period rife with tension in multiple dimensions, only one of which was the women’s lib movement. This period saw the continuing struggle by African Americans for equality and civil rights. The woman interviewed for the April 15 article emphasized that she, and many other black women, identified as black first and a woman second in terms of their identity and sources of oppression.

In 1977, the Kitty Genovese Women’s Project, named for the woman who was murdered while numerous people who were aware of what was happening did nothing, posted a list of 2,1000 male sex offenders in Dallas County. A group of 30 women handed out over 20,000 copies of the list. Many black feminists took issue with the list as black men were disproportionately represented due to a higher conviction rate among blacks for all crimes due to the racial bias of the criminal justice system.

In 1966, the militant civil rights activist group the Black Panthers formed in in Oakland California. Many black women were involved in the black movement and wanted to work with the men in that movement to achieve their collective goals. Many white feminists, however, argued for a complete break with men.

This argument originated during the first wave of feminism in the United States. Some male abolitionists argued that it was the “Negro’s Hour,” during the last ninetieth century, to quote Wendell Phillips. Men such as Phillips, and Frederick Douglass believed the main focus of the period had to be black men’s rights and that women’s suffrage would have to be pushed to the back burner.

This led women’s suffrage leaders like Elizabeth Cady Stanton and Susan B. Anthony to found the women’s-only National Woman Suffrage Association. This break from the abolition movement may be viewed as a break from black issues in general, which sowed the seeds for the division that reemerged in the next phase of the movement.

In June 1979, “Off Our Backs” published a special “Ain’t I a Woman” issue, named for a famous speech given by Sojourner Truth at the 1851 Women’s Rights Convention in Akron, Ohio. Truth’s speech confronted the stark differences between the treatment of white and black women: “Nobody ever helps me into carriages, or over mud-puddles, or gives me any best place! And ain’t I a woman?”

The special issue included a statement from the Combahee River Collective, a black feminist group from Roxbury, Massachusetts. The statement said: “As black women, we see black feminism as the logical political movement to combat the manifold and simultaneous oppression that all women of color face.” They emphasized that, “Black women’s development must be tied to race and class progression for all blacks.” 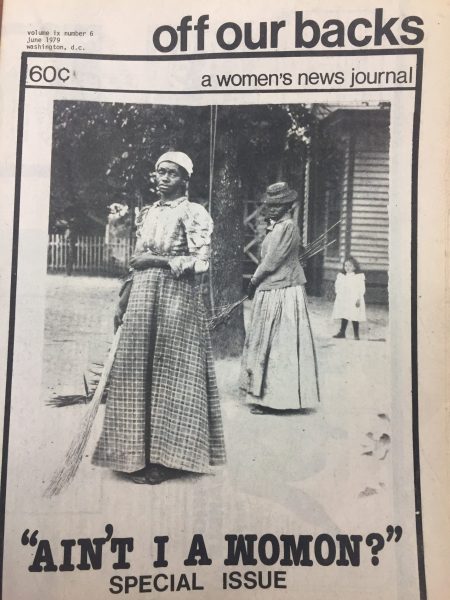 This special issue was produced by the Ain’t I a Woman Collective, a black feminist organization based in D.C.

The black women and feminists of the period did not believe their plights as black people living in America and as women living in America could be separated. They believed they could not progress as whole humans without both issues, in addition to class, which was often correlated with race, being addressed.

One of the important issues that black women said white feminists did not grasp was welfare. A much larger proportion of black women were in poverty than white women during this period. The U. S. Census (Current Population Survey and Annual Social and Economic Supplements data) from 1975 shows that 27.1 percent of black families were in poverty compared to 9.7 percent of all families. Those statistics become even more staggering when we look at poverty rates for single-female households. 50.1 percent of black families with a single mother were in poverty compared to 32.3 percent of all other single-female households.

Intersectionality hinges on the idea that people have a complex identity that is shaped by a variety of demographic and experiential factors such as race, class and education. Black women were dealing with a variety of issues and sources of oppression during this period that, evidently, many of the white leaders of the feminist movement did not see as falling in line with their goals.

In the winter of 1974, some of the “Off Our Backs” staff attended the first meeting of the National Black Feminist Organization (NBFO). The group’s mission was to “fight racism and sexism jointly.” “Off Our Backs'” coverage of the event acknowledged that black women have an ethos to speak about issues that white women are unable to assume: “While ‘Off Our Backs’ has never been vague about its commitment to cover the issues and to carry messages about them to feminists, only a group like NBFO deeply immersed in the survival struggles of low-income black sisters and their own experiences, can be a valid messenger and a forceful mover of these issues.”

The coverage of the event emphasized that racism has kept women systemically divided by making minority women feel they could either be black or a feminist. Unfortunately, the article is critical of the fact that that many speakers ranked racism over sexism in terms of which was a more pressing issue. This clearly displays that many white feminists could not grasp the fact that these women felt they needed to confront the systemic racism in the country in tandem with, and perhaps, some would argue, before, sexism.

The “Off Our Backs” article said that black men did not want black women to join the feminist movement and point out that male-dominated black media outlets like “Jet” or “Ebony” did not attend the meeting when many white feminist presses did. The writers also criticized black feminists for not utilizing these feminist outlets. This provides an interesting area to use to examine the underlying issues here – black women’s issues were not covered well by most white-dominated feminist media outlets, yet the writers of “Off Our Backs” suggest that these women were not reaching out to allow their stories to be told by these papers.

It is necessary to mention that there is a conspicuous lack of exclusively black feminist publications in Archives and Special Collections’ holdings at the Dodd Center. This may be attributable to gaps in the collection or there may have been few publications that served this specific interest group. It seems that black women’s issues were split between the feminist and black movements with some overlap in the media for each.