–This is a guest post by UConn Senior Matthew Kosior (Political Science and French/Francophone Studies Major and a Human Rights, Spanish and International Studies Minor), recently completing his internship at the Archives & Special Collections, focusing his work on the Laurie S. Wiseberg and Harry Scoble Human Rights Internet Collection.

The Balkans are once again becoming a highlight in international news with the upcoming appointment of the Secretary-General of the United Nations. Of the 9 nominees from throughout the world,  5 have originated from the Former Yugoslavia, reflecting the importance of the region and its role in sculpting leaders that are prepared to lead one of the world’s most crucial international security organizations. The news could not put more light onto the region and my current work at Archives & Special Collections in the Thomas J. Dodd Research Center.

Through my research that has analyzed the various intricacies of the region, I have come across numerous UN resolutions and other documents written by Amnesty International that had been written by Slovenia’s Danilo Türk, one of the current nominees to the UN head position. With his nomination, we see that the plethora of archives possessed by the University of Connecticut have a deep and critical importance not only in the historic realm, but also in contemporary human rights and international relations sphere. These documents demonstrate Türk’s dedication to peace and an end to human rights violations early on in his political career and this nomination has evidently confirmed his fit for one of the most important positions for human rights.

Having spent four months on my research guide, I have taken the hundreds of documents, which are found in the Human Rights Internet archives, and broken them down into topics that easily pinpoint any reader to specific topics of the war. Many underlining factors for example lead to the Yugoslav war, and under my research guide, one can find information relating to the Polish Solidarity movement and how it had triggered revolt and unrest in Yugoslavia. In addition, Yugoslav-Soviet relations and the economic crisis of the 1980s, which had undercut stability in the country also had a detrimental effect to the incitement of the war. The indicators of violence and economic downturn before the outbreak of the war illustrate the factors that all together sparked a horrific genocidal and bloody war in Yugoslavia.

In addition to helping understand the underlying factors of the war, the research guide also has given a fundamental understanding of the wide amounts of advocacy that had been calling for an end to the war and the mass amounts of human rights violations. Amnesty International for example had initiated global advocacy for a cease-fire. Being able to gather all the advocacy reports and systematically break them down into specific topics within the over 50-page guide was very difficult, but it gave me the skills to analyze quickly and effectively within a very organized structure. Without a doubt, the time spent in the Archives had not only made me more knowledgeable about such a complicated history, but further provided skills that are critical for my future career as an International lawyer, such as efficient reading skills, an ability to apply the knowledge attained to the current contemporary events in relation to that part of the world.

I believe that one of the highlights of this internship must be the clear bias that western agencies have when covering an international conflict. The documents at the archives center, without a doubt, are heavily biased. Had I no background in the topic, I would have left this internship believing that the blame for the eruption of war was solely due to Serb aggression. Nevertheless, if we look into history and understand that for example there had been massive Serb emigration from Kosovo due to ethnic discrimination and cleansing of Serbs in Kosovo for hundreds of years, one should have a very different perspective on the current status of the quasi state. The sheer lack of documents that touch on the NATO bombings of Serbia and how thousands of innocent Serbs died essentially by American aggression is one of many examples that help us see this bias. While there may have been a few documents that touch on the topic, most Amnesty International documents avoid to discuss the horrific deaths of women in labor when NATO had “mistakenly” bombed hospitals.

In all, I would say that this internship has well prepared me for my future career and has allowed me to spread awareness of the importance of the region, and advocate for the halt of human rights violations, especially acts of genocide. Furthermore, the ability to organize a very complicated research guide that arranges various topics and hundreds of documents has benefited my skills to research and will further facilitate research for scholars in the future. 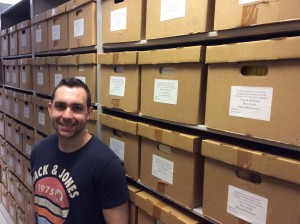