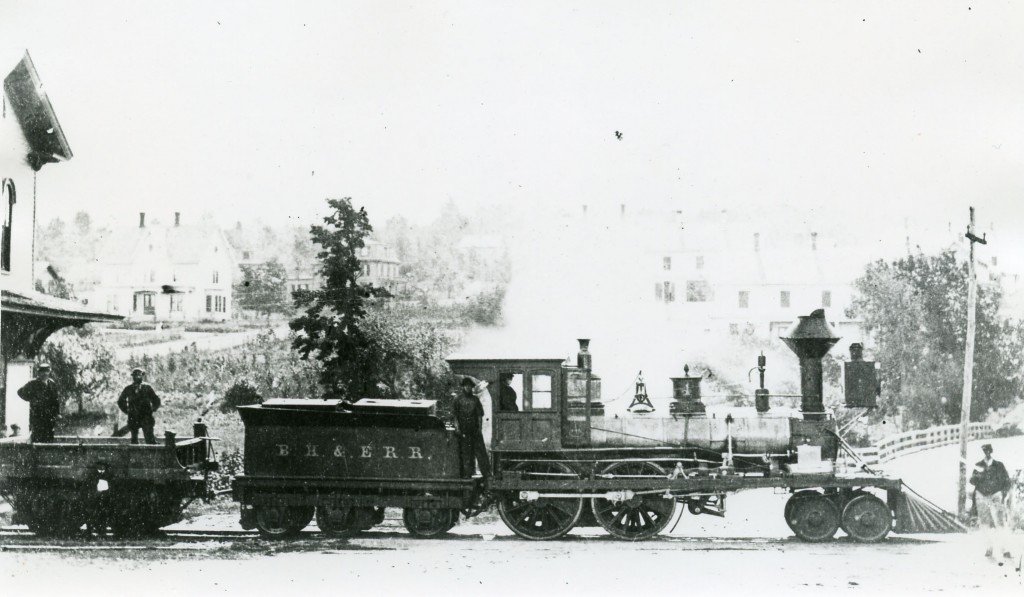 The “Hookset,” built in 1842 at the Hinkley & Drury Shops for the Concord Railroad. Was Locomotive #1 of the Boston, Hartford & Erie Railroad in 1863, then the New York & New England Railroad’s Locomotive #1 in 1871. From the Frances D. Donovan Papers, Archives & Special Collections, University of Connecticut Libraries.

One hundred and fifty years ago, in June 1863, the Boston, Hartford & Erie Railroad was incorporated with the goal of forming a gateway to western markets for New England goods and of bringing coal from Pennsylvania into New England by way of Newburgh, New York, to Waterbury, Connecticut, and beyond.  Its lofty goal disintegrated when it came under the control of “as ribald a bunch of crooks as railroad history has ever produced,” wrote D.W. McLaughlin in his article “Poughkeepsie Gateway,” for the October 1968 issue of the Bulletin of the Railway & Locomotive Historical Society.  The railroad ran into a myriad of troubles, including the realization that building an east-west route across Connecticut would involve navigating the state’s ridge lines, the problem of aligning with the non-standard gauge of track on the Erie Railroad (the western line it would hook up with once the railroad cars crossed the Hudson River), and the lack of a bridge for which to travel over the river.  That apparently did not stop the railroad’s promoters from selling stock in the line, which they proceeded to mercilessly raid and pillage.  The legislature of the state of Massachusetts was persuaded to give $3,000,000 in grants, odd in that the bulk of the railroad didn’t actually travel in that state, as it went into Connecticut.  By the time the graft caught up with all the players, in 1870, the railroad was in bankruptcy with a mere $10.00 left in its accounts, Massachusetts was out all of the money it invested, and very little actual railroad track was ever laid.  The remaining assets were transferred to the receivers of the New York & New England Railroad, who rerouted the railroad line from New York City to Boston and eventually became part of the New Haven Railroad system.