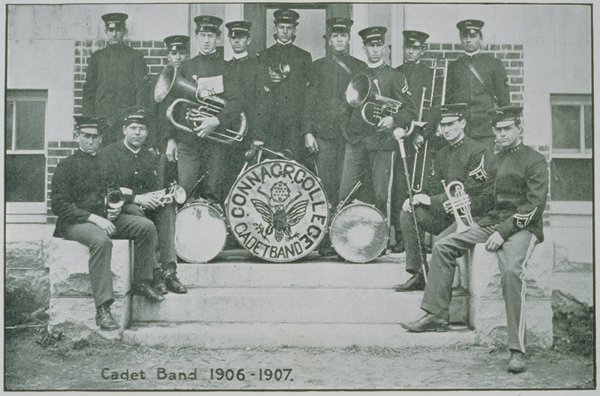 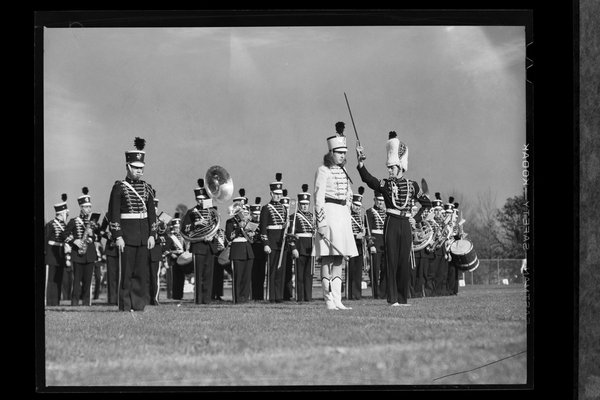 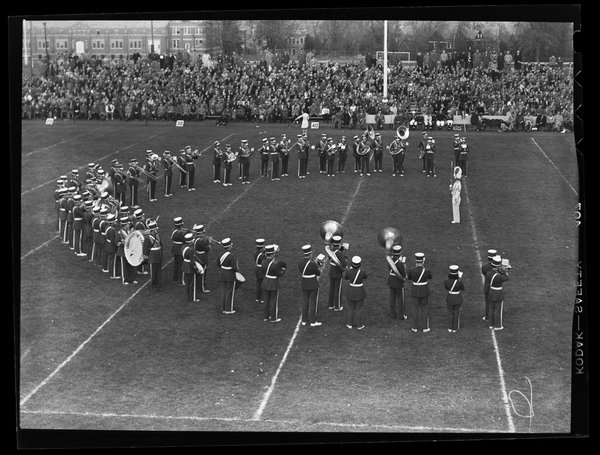 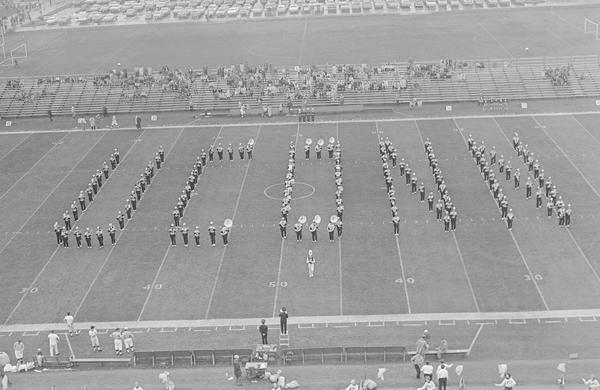 UConn Marching Band plays at a 1968 football game against Maine 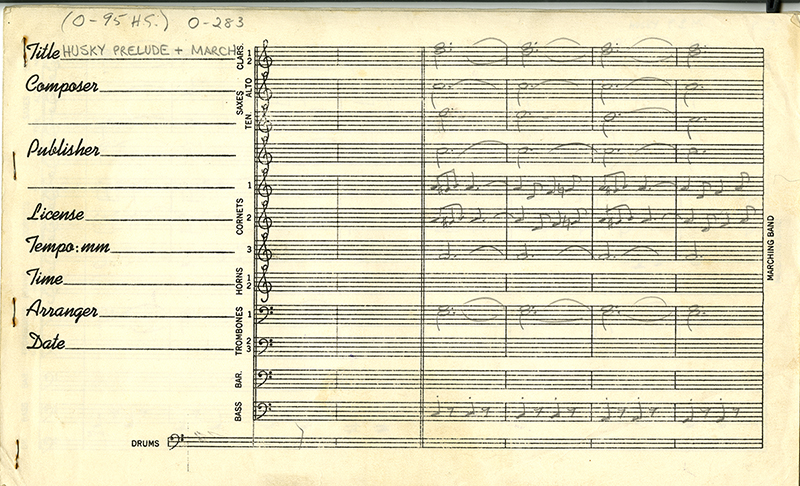 Page 1 of the Arrangement for the Husky Prelude and March, from former UConn Marching Band Director David Maker 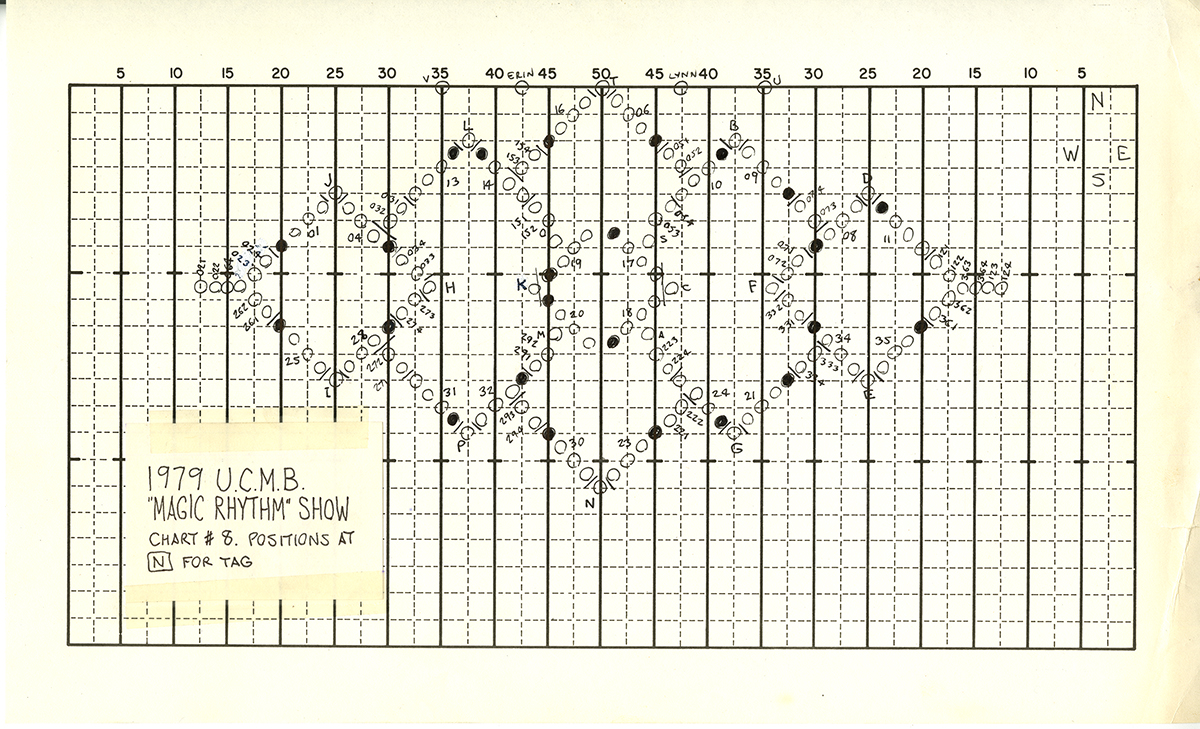 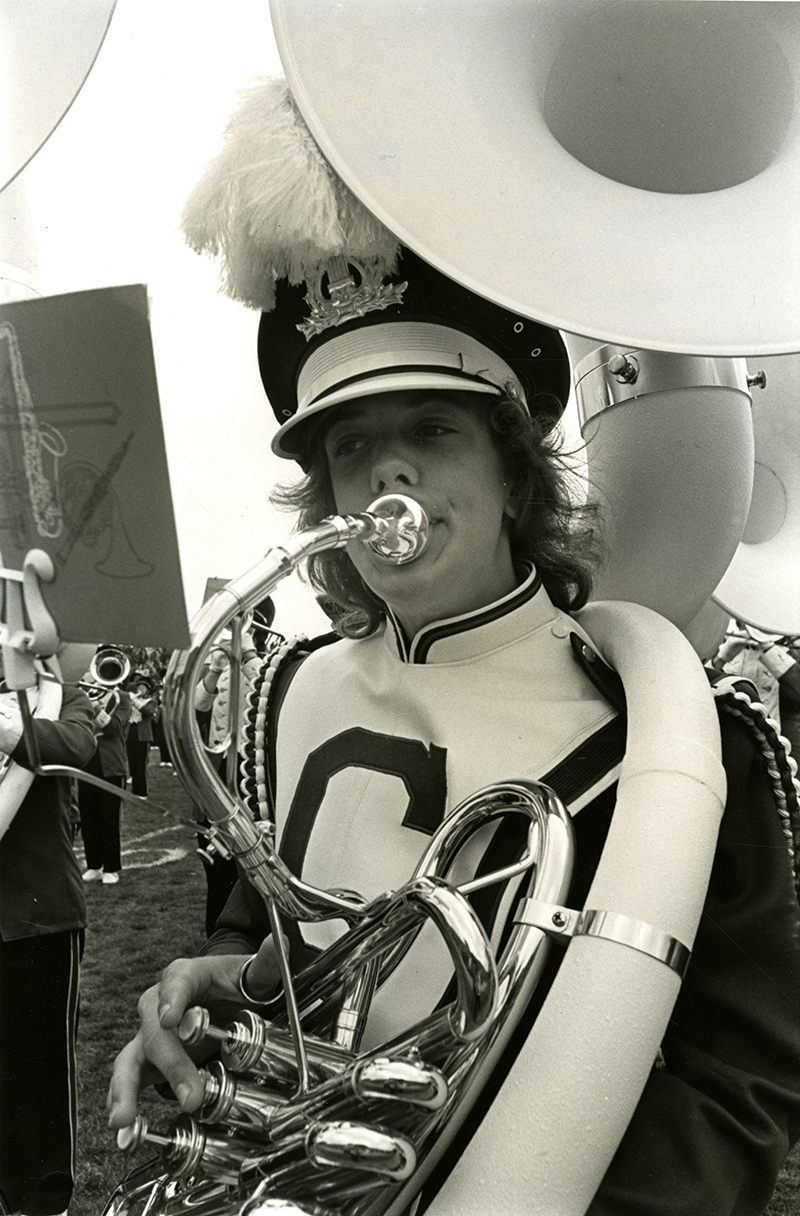 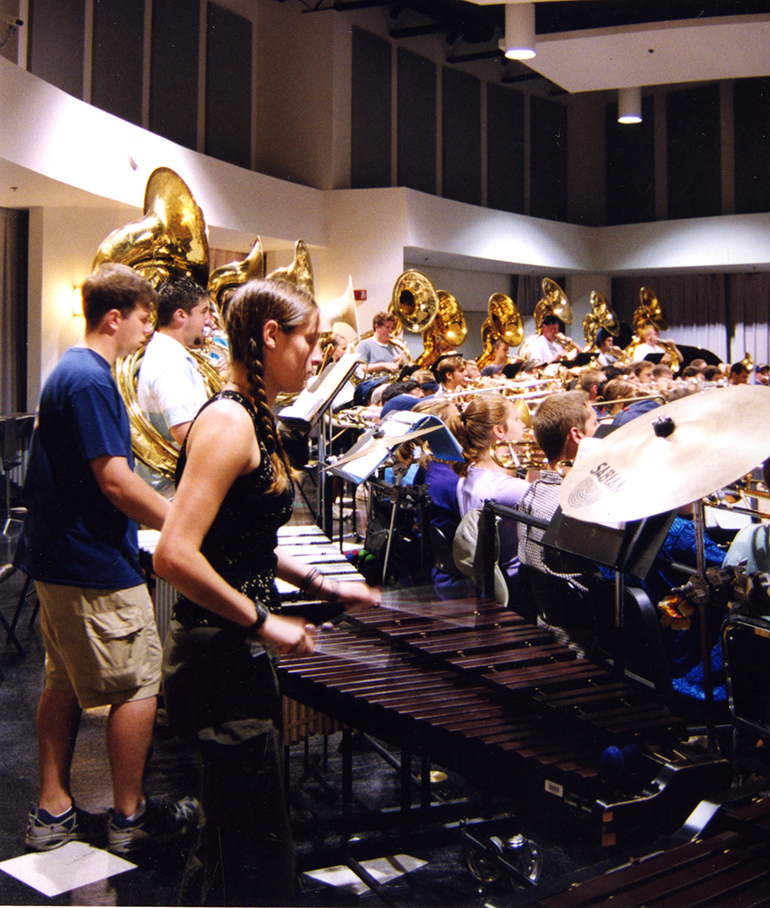 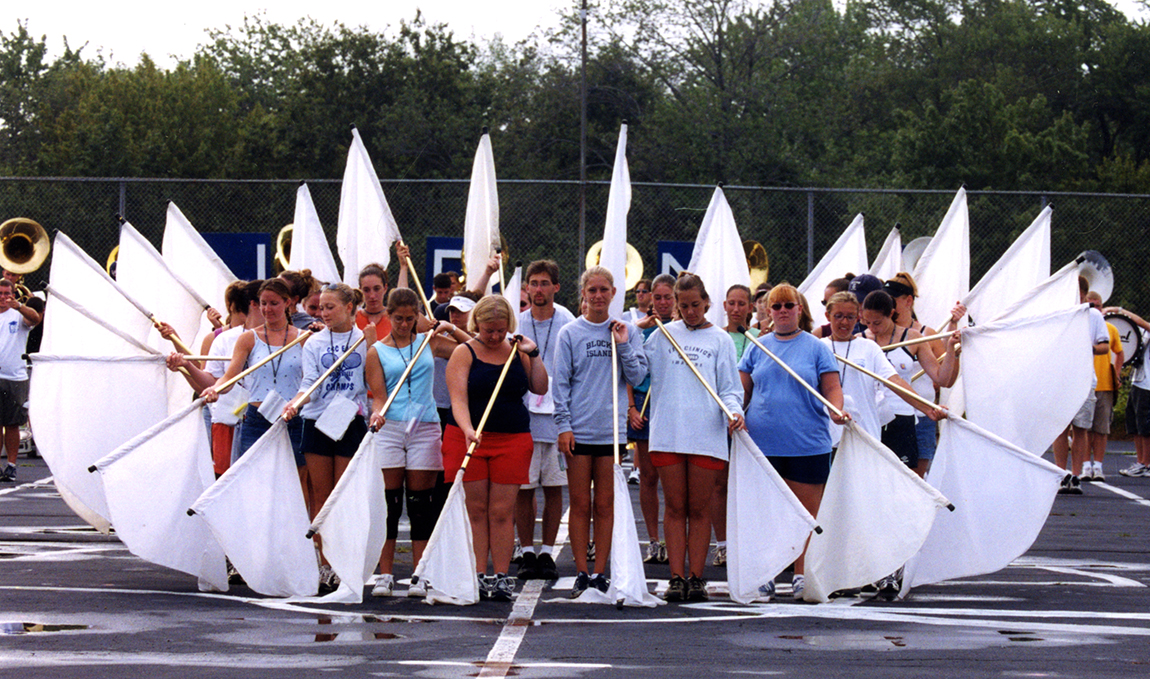 Members of the Marching Band practice with flags, circa 2001 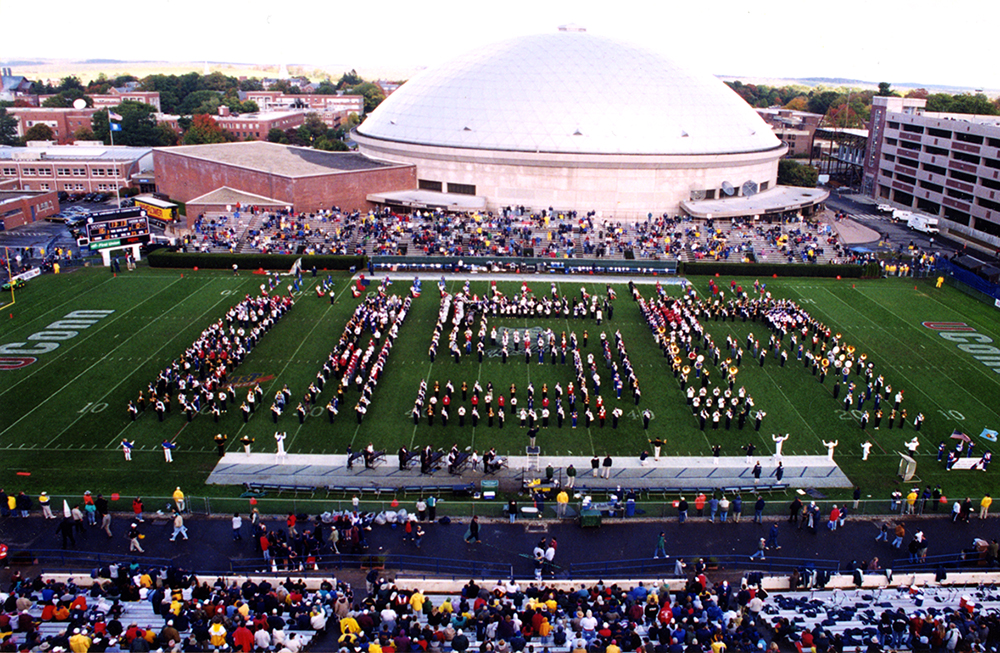 UConn Marching Band arranged in a ‘USA’ formation at Storrs, circa 2001 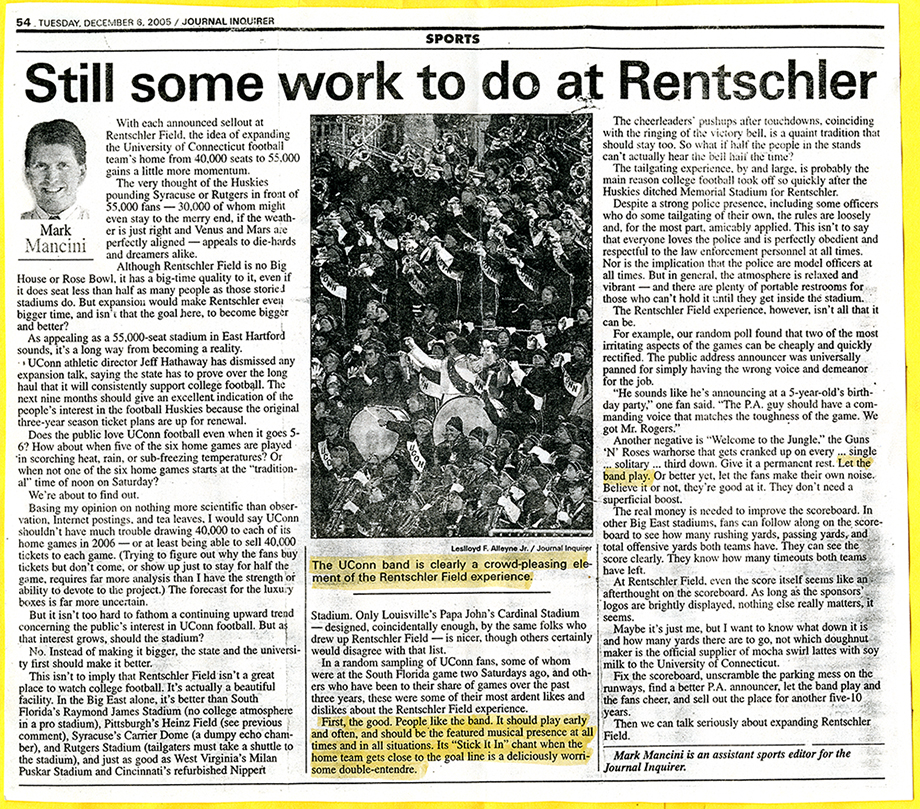 Music and bands have been a tradition at the University of Connecticut for over a century.  Beginning with small musical organizations and military bands, there were many predecessors to what is now referred to as the UConn Marching Band. The origins of the current organization can be traced back to 1939, the same year that the Connecticut State College in Storrs became the University of Connecticut. In that year Jack Brocjek, at the time an assistant instructor of music at the school, became director of the school’s “College Band” and decided to make his band open to all students, which effectively merged his with the ROTC’s band.

While the creation of the band occurred at the end of the 1930s, the 1950s was really when it gained prestige and an increase in the number of participants.  Professor Allan Gillespie took the reins in 1956, and the band grew immensely during his 25-year tenure. It was under Gillespie’s leadership that the band embarked on three separate tours of Europe in the summers of 1970, 1974, and 1978.

Gillespie’s time as director was followed by the terms of David Maker and Gary Green in the 1980s. Current director David Mills took over in 1989 and led the band in such special performances as President Bill Clinton’s 1993 inauguration parade, the 2003 opening of the 40,000 seat Rentschler Field in Hartford, and performing for over 100,000 fans at the University of Michigan in 2010.

Researchers interested in the UConn Marching band will find a plethora of information in Archives & Special Collections. In addition to the marching band’s official records, the UConn Archives has student publications, photographic prints, files belonging to past band personnel, administrative documents, and more. Among some of our archives’ relevant collections are:

University of Connecticut Marching Band Records.  This is the most comprehensive of all collections pertaining to the UConn Marching Band. It includes various forms of primary sources from the band, including pamphlets for performances, musical scores, scrapbooks, newspaper clippings, photographs, and cassette tapes. The records date back to the early 1960s, corresponding closely with the first few years of Allan Gillespie’s tenure as band director. The finding aid to the collection can be found at https://archivessearch.lib.uconn.edu/repositories/2/resources/1020

Maker Collection of the UConn Marching Band. Comprised of arrangements, arranged for the marching band by Dr. David Maker, who worked with the band for many years, dating from 1969 to 1983. The finding aid to the collection can be found at https://archivessearch.lib.uconn.edu/repositories/2/resources/512

University of Connecticut Photograph Collection.  The collection holds hundreds of photographs of the UConn Marching Band. The band’s images are filed with the UConn Athletics items and are sometimes merged with the Pep Band’s photos. Another area to find early images of the marching band are those taken by Jerauld Manter, a professor at UConn from 1912 until 1953.  The finding aid to the UConn Photograph Collection photographic prints can be found at https://archivessearch.lib.uconn.edu/repositories/2/resources/5. A finding aid to the Manter images is at https://archivessearch.lib.uconn.edu/repositories/2/resources/946

Thousands of images from the University of Connecticut Photograph Collection can be found in the UConn Library digital repository, beginning at https://archives.lib.uconn.edu/islandora/object/20002%3AMSS19880010. Those showing the marching band are available at https://archives.lib.uconn.edu/islandora/search/marching%20band?type=edismax&cp=20002%3AMSS19880010

University of Connecticut, President’s Office Records [Glenn W. Ferguson].  Glenn Ferguson served as the President of UConn from 1973 to 1978. His records include information about plans for the marching band to travel on tour in Europe. The finding aid to the Ferguson records is at https://archivessearch.lib.uconn.edu/repositories/2/resources/606 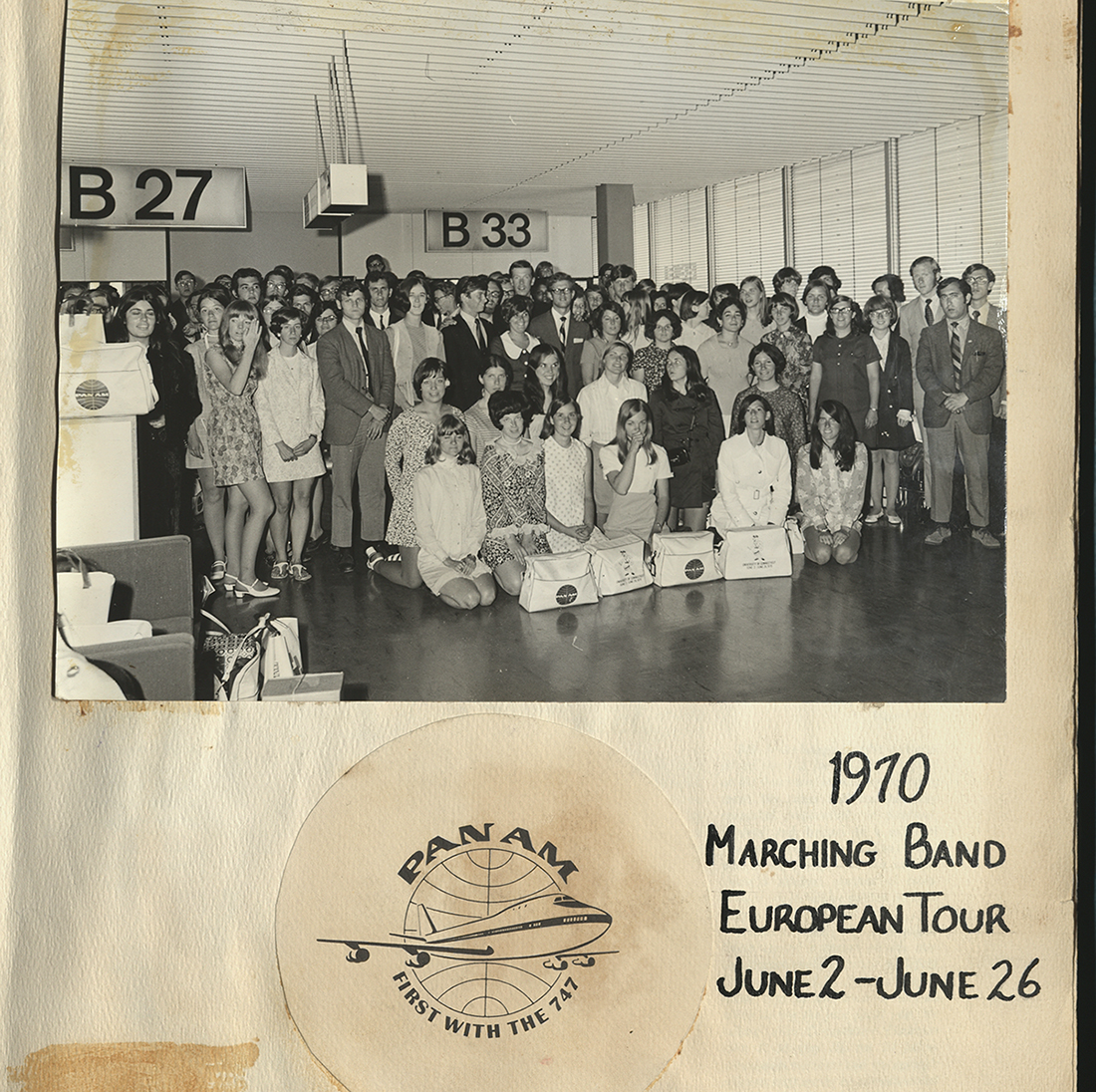 UConn Marching Band at the airport for the 1970 European tour, from the 1970 Scrapbook 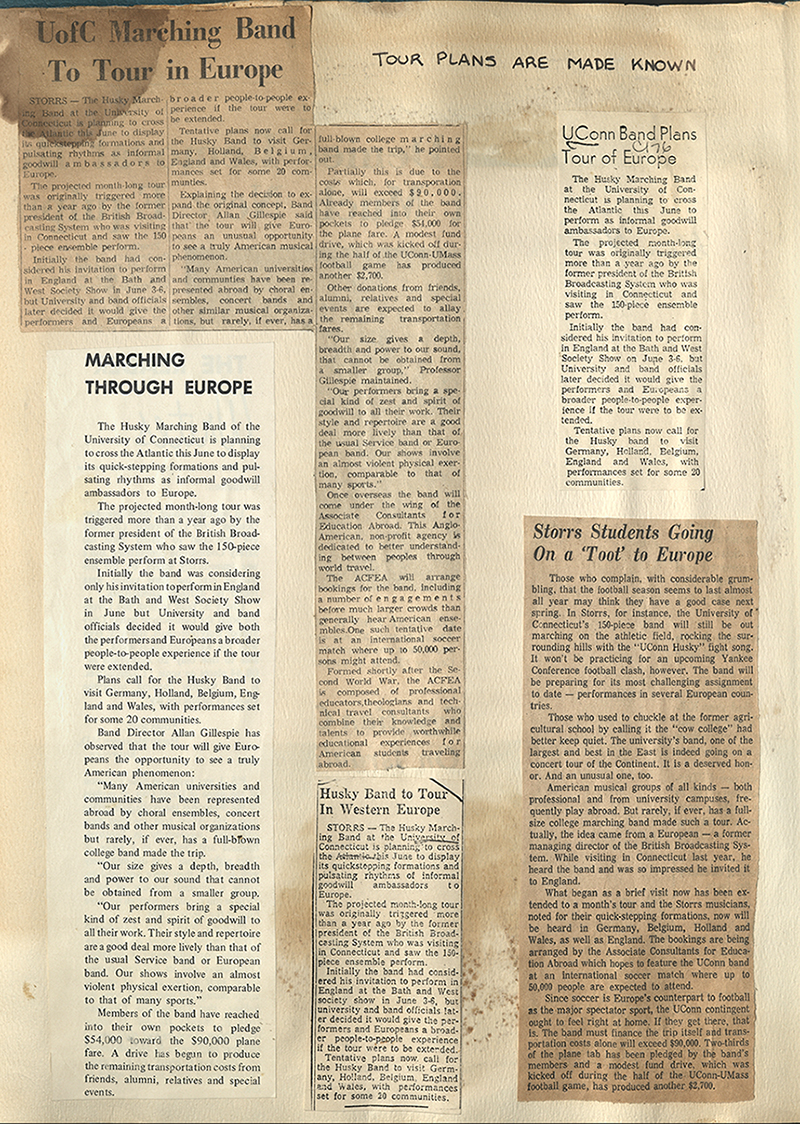 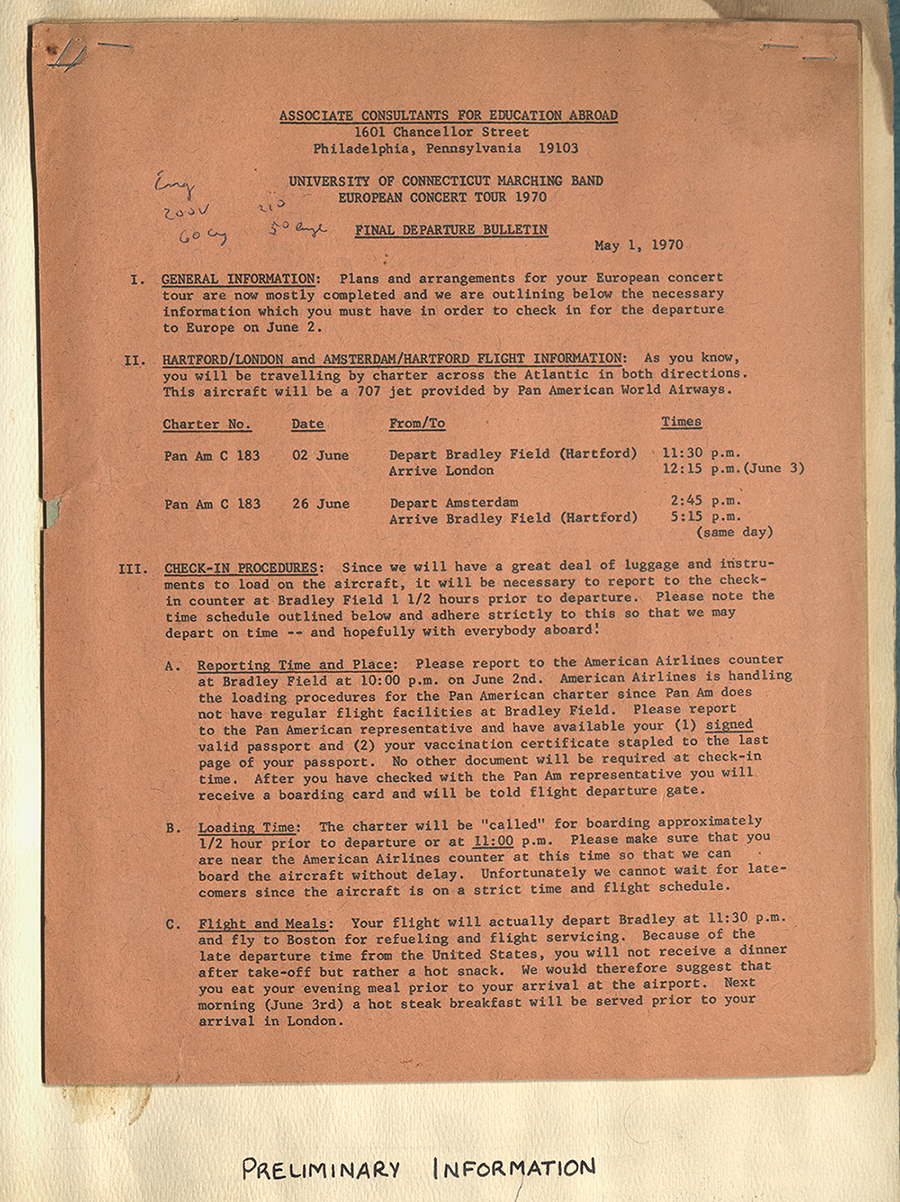 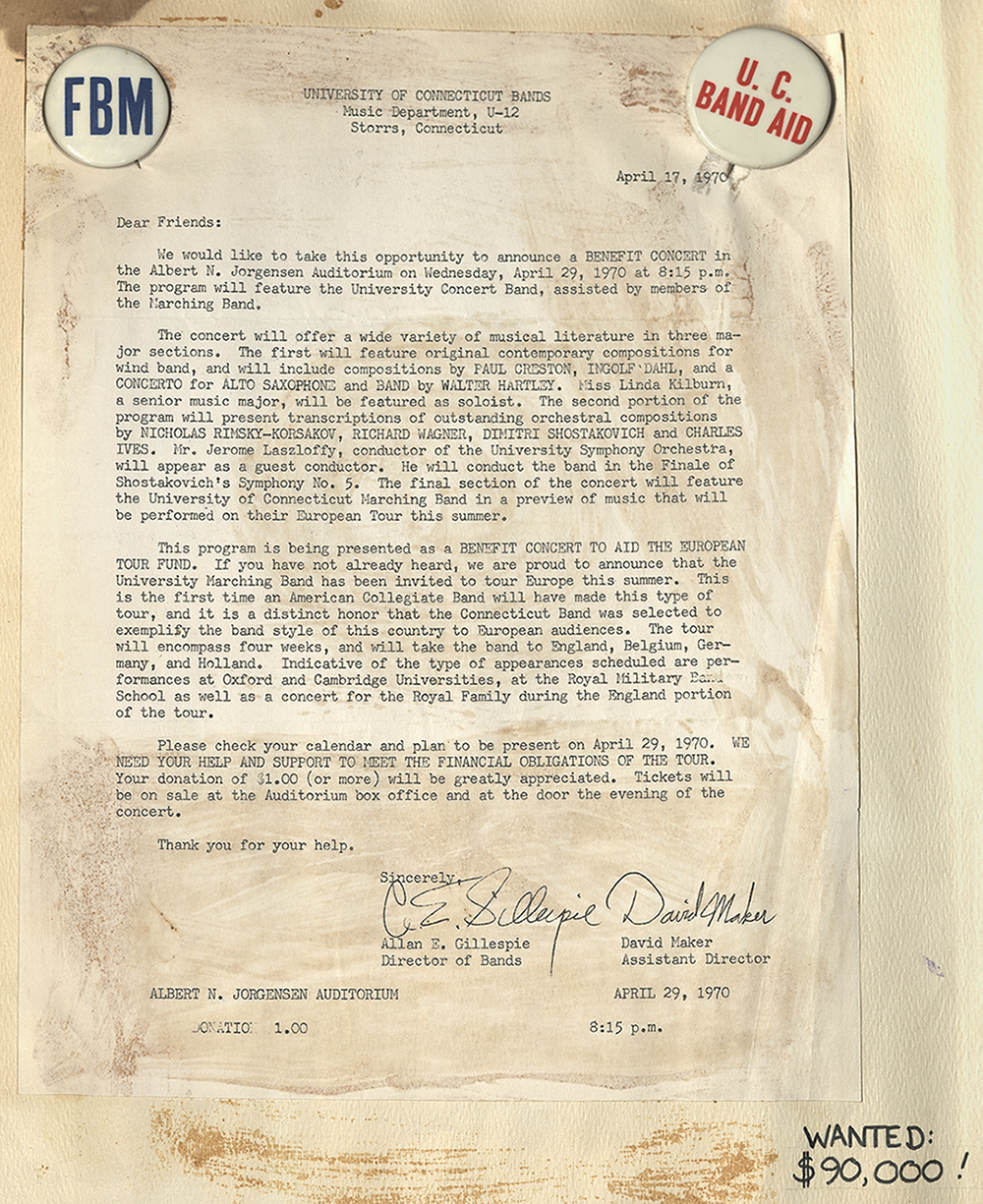 UConn Marching Band 1970 European Tour scrapbook page, with a letter from Director Allan Gillespie and Assistant Director David Maker about a benefit concert on 4/29/70 to fund the upcoming tour 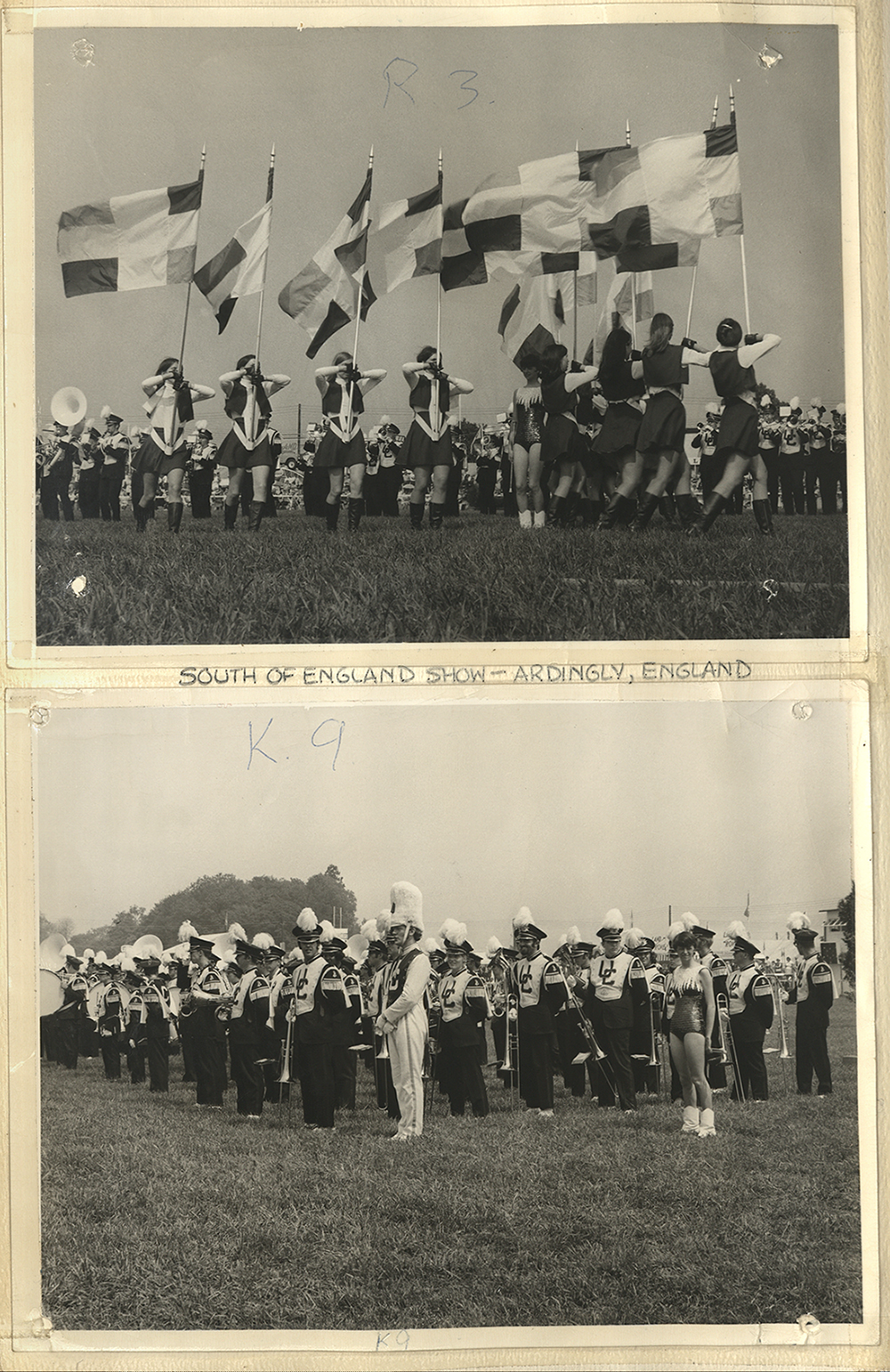 Daily Campus and other student publications. The origins of a music program at the university occurred concurrently with that of the student newspaper and are a great source to show the formation and evolution of the marching band program. The student newspaper originated with the Lookout in 1896 and transitioned to other titles, including The Connecticut Campus and Connecticut Daily Campus, to The Daily Campus of today. A full run of newspapers up to 1990 available in the UConn Archives can be found in the digital repository beginning at https://archives.lib.uconn.edu/islandora/object/20002%3A860408189.

Nutmeg, the student yearbook.  The Nutmeg originated in 1915 and includes photographs of the marching bands through the years. You can find issues from 1915 to 1999 in the digital repository beginning at https://archives.lib.uconn.edu/islandora/object/20002%3A02653871