This exhibit shows scenes of Connecticut’s workers doing Hard Work. Capital H, Capital W.  The kind of work where you surely need the brains but if you ain’t got the brawn it’s not gonna happen.  And we’ve got plenty of photographs in our business collections showing the men and women in the state in various depictions of work where some of the main job requirements are muscle and sweat.  I’m sure tears were there somewhere but the photographs don’t really show that.

In the late 19th and early 20th century — a time period in America known for big industry — Connecticut was one of the major players, producing brass, iron, steel, tools, textiles and more for the state, the country, and the world.  These products didn’t just happen.  It took a workforce of thousands, many of them new immigrants who flocked to Connecticut for these types of jobs, to produce, to make, to build, and to work. 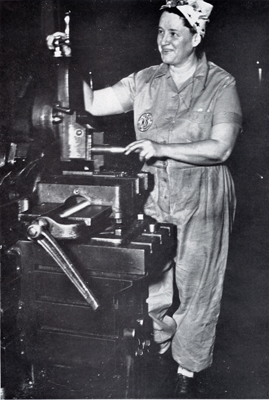 The blog post on November 14 showed a photograph and document from the E. Ingraham Company Records.  Here are two more documents and some more questions.

What work is the company doing that is so important to the war effort? How has the E. Ingraham Company responded to the command from the government to step up production?  Do you think Edward and Dudley Ingraham were fair to not allow Christmas parties at the company during work time?

The E. Ingraham Company of Bristol, Connecticut, was a maker of clocks and watches from its founding in 1831 by Elias Ingraham, to its demise in 1967.  It was run by descendents of Elias Ingraham for all but the last 15 years of its existence.

Letter to E. Ingraham Company from the U.S. Department of Labor, 1944

Use this photograph and the letter to create a narrative of what was happening at the E. Ingraham Company, and in the United States, at the time.  Some questions to ask include:

What was happening in the country in 1944?  What conditions would have necessitated the need for hiring girls at the company?  What kind of work were the workers doing that was so important to the government?

More information and some more documents will come in a couple of days.  For now, use the documents, and your own knowledge of the circumstances of the time, to describe what is happening.  Let us know what you think by leaving us a comment!