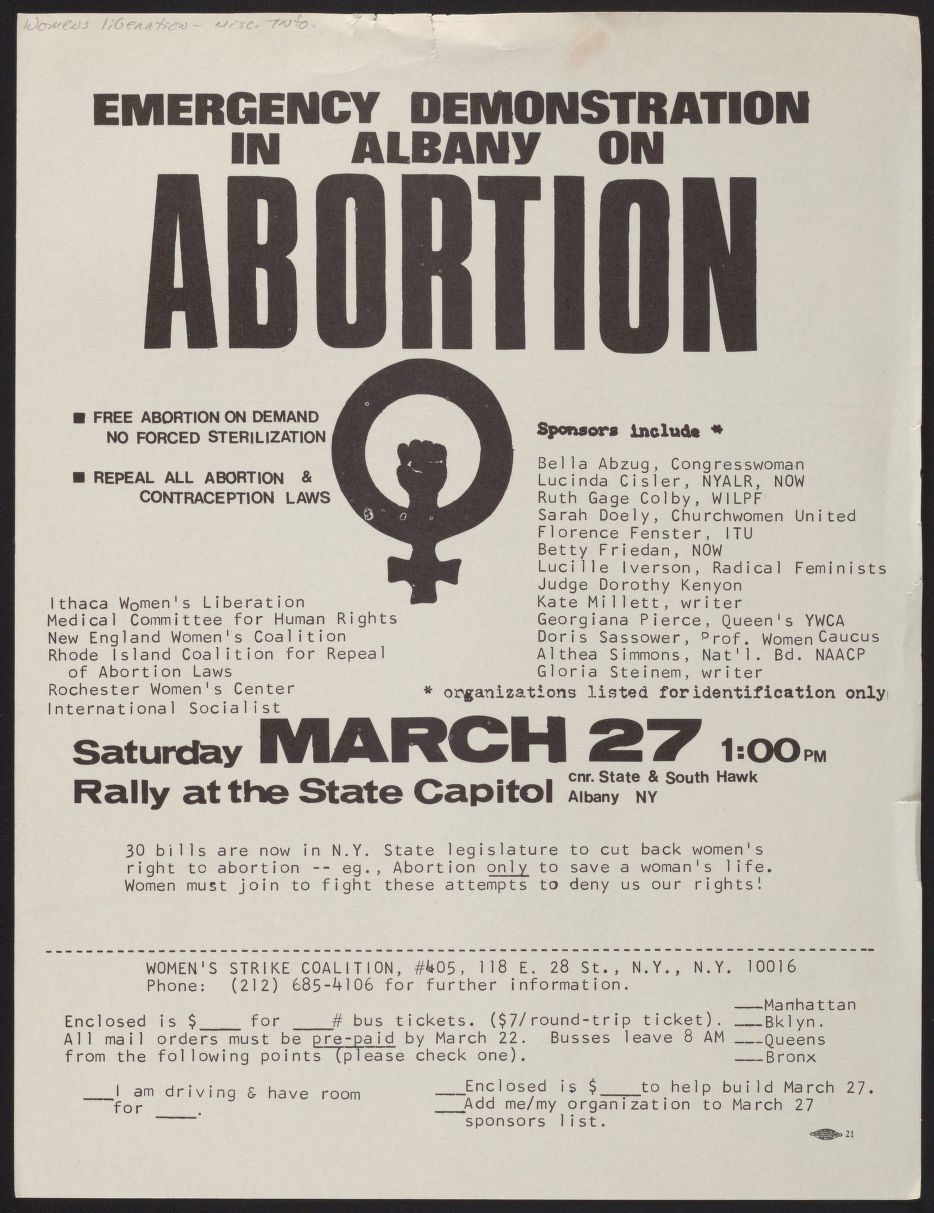 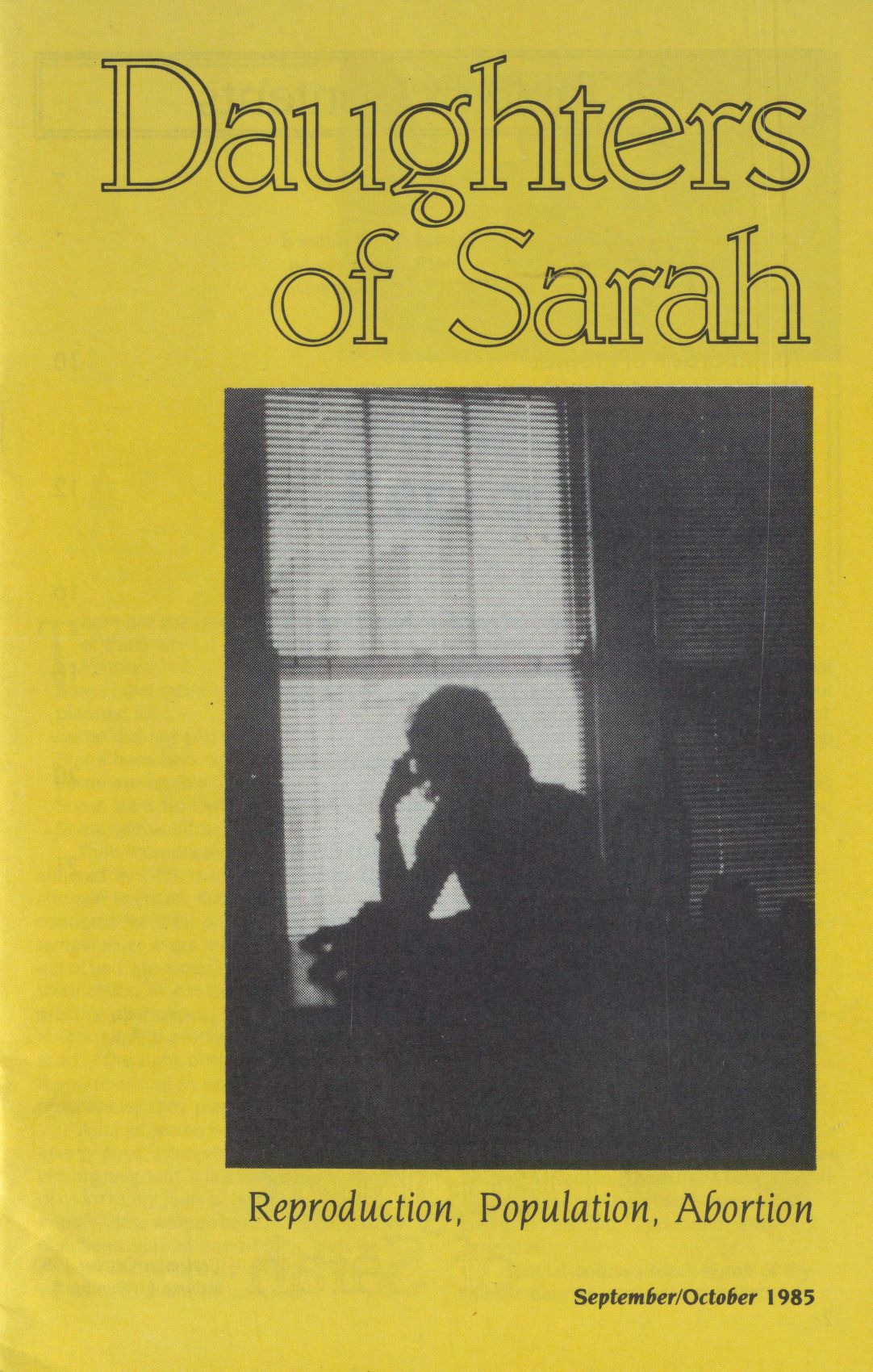 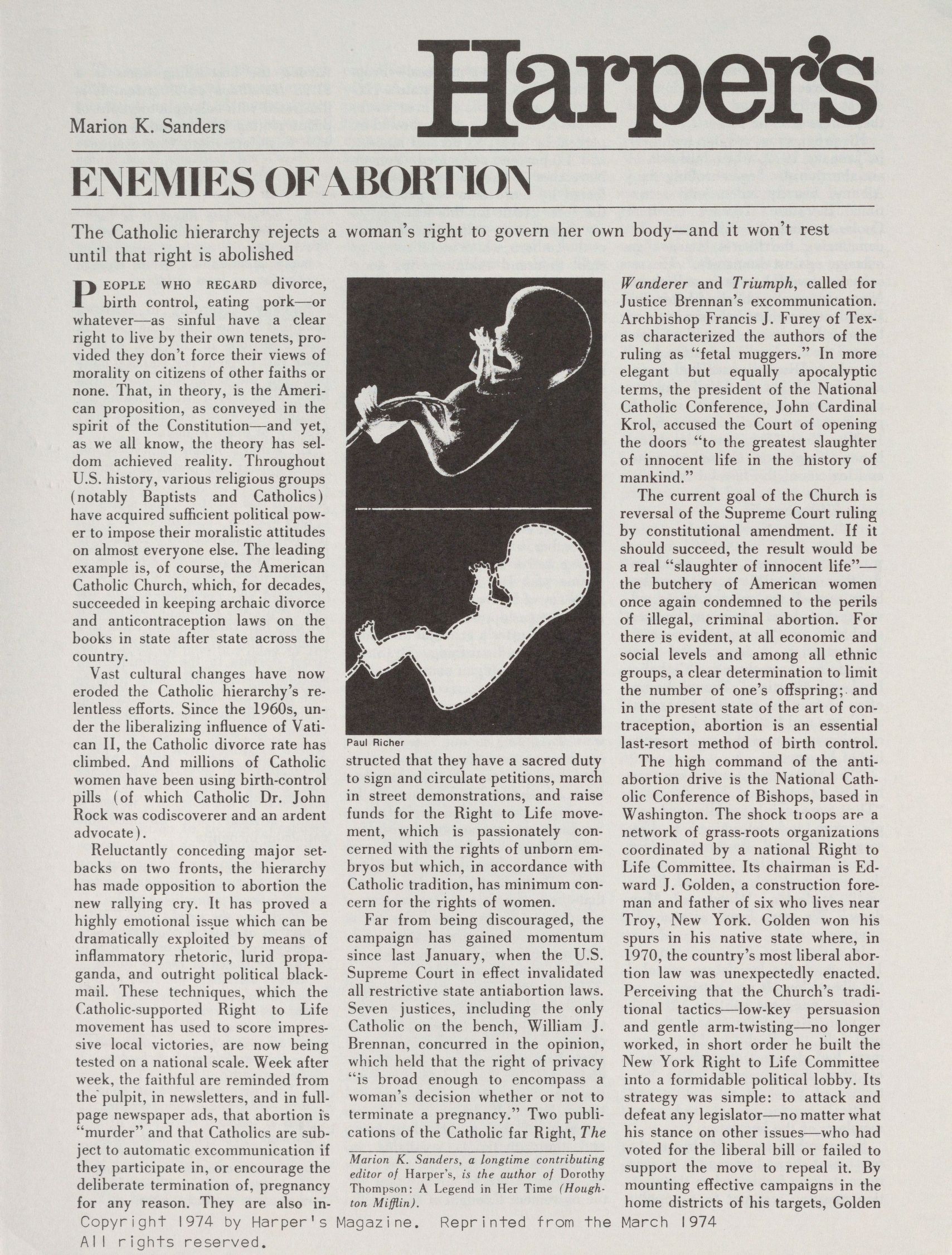 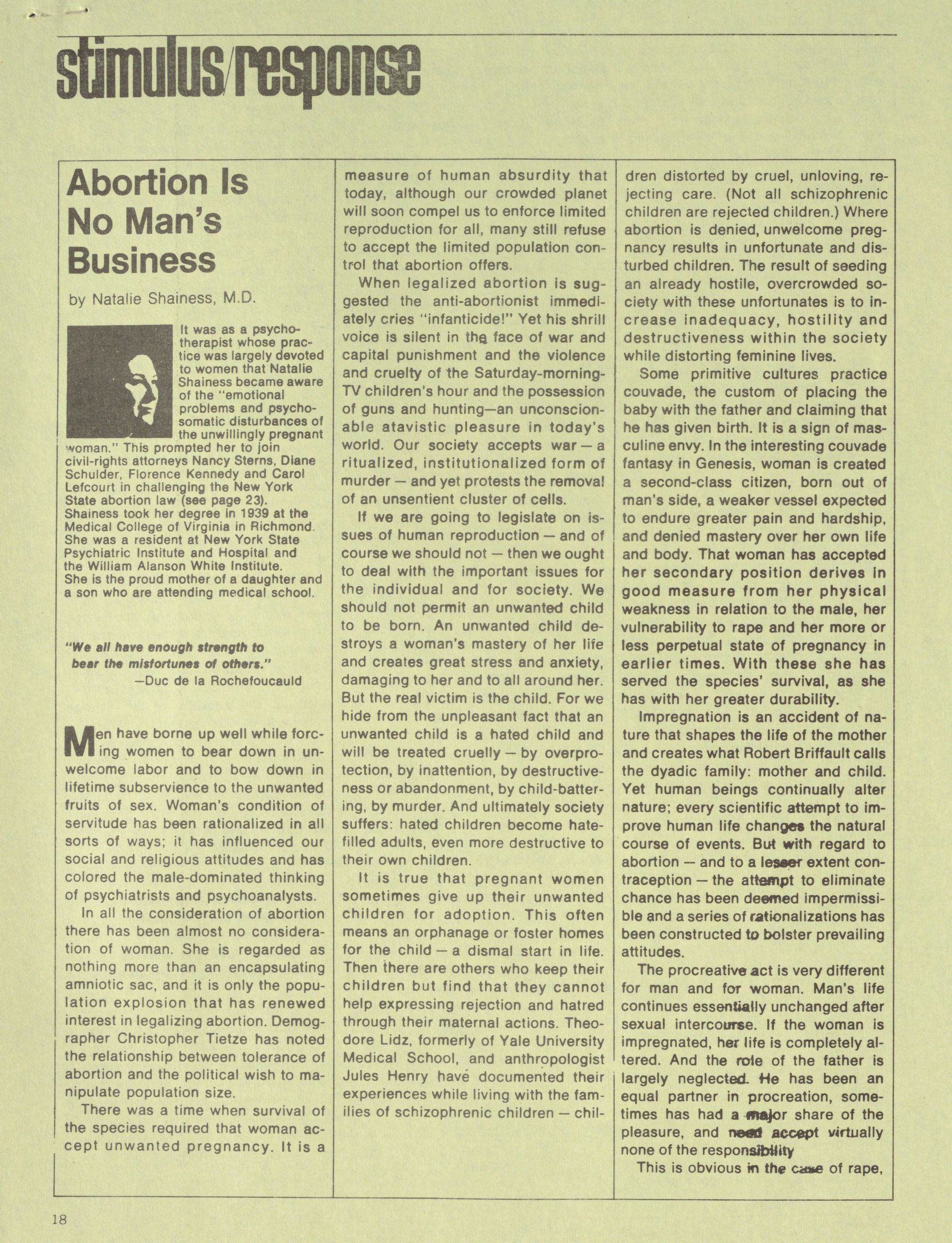 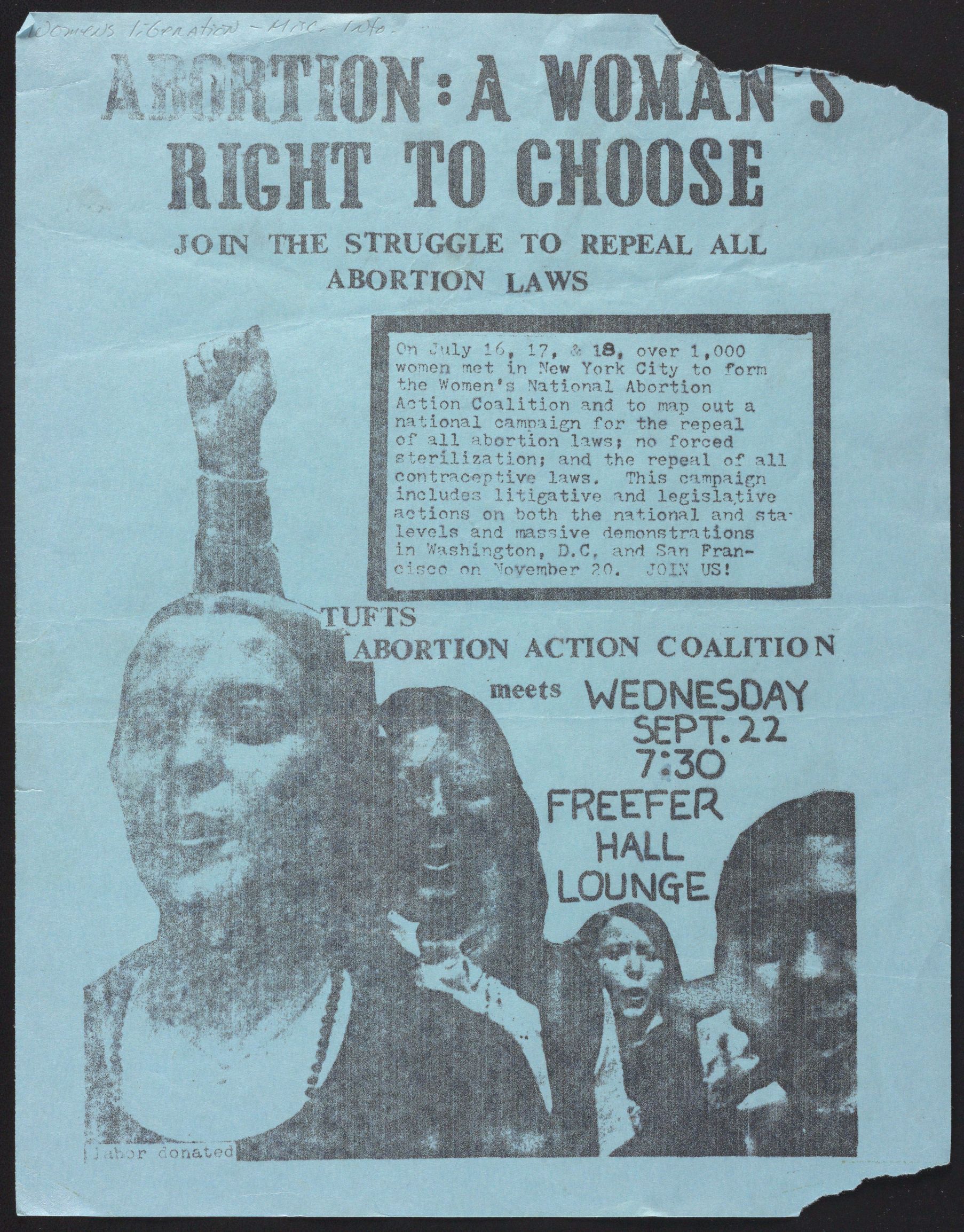 The landmark decision in Roe in 1973 stated that “the Due Process Clause of the Fourteenth Amendment to the U.S. Constitution provides a fundamental “right to privacy” that protects a pregnant woman’s liberty to abort her fetus,” while the 1992 decision in Casey modified Roe by holding that requiring spousal awareness in order to get an abortion put undue burden on married people seeking abortions.

As of the June 24 decision in Dobbs, abortion is no longer a constitutionally guaranteed right in the United States, leaving the decision to individual states.

For those conducting research projects about reproductive rights, abortion, or related topics, Archives & Special Collections holds resources related to the topic in various media, both from pro-choice and anti-abortion perspectives. These materials range from polling information, correspondence, political documents, organizational literature, and much more.  Among some of our archives’ relevant items are:

APC File Inventory – This link goes to a list of all the publications within the APC Files, both digitized and physical.

Archives Batch Search for “APC Abortion” – This link goes to a search result on the UConn Library website that includes 22 results for items in the APC Files related to abortion.

Public Official’s Records. The following list are each their own collections, consisting of papers belonging to political officials, with each collection including text related to reproductive rights or abortion.  For more information on how to navigate these collections, finding aids can be found online at the links with each name.

Audrey Beck Papers – Audrey P. Beck (1931-1983) was a Connecticut politician and professor. She served in the Connecticut House of Representatives from 1967 to 1975, followed by a term in the Connecticut Senate from 1975 until her death in 1983. Prior to her political career, Beck taught Economics at the University of Connecticut.

Connecticut State Labor Council, AFL-CIO Records.  This collection consists of the records of the Connecticut branch of the AFL-CIO, the United States’ largest labor union federation.  Relating to the issues of reproductive rights and abortion, one item that the collection has is a group of letters from people commenting on whether or not the union should take a pro-choice stance. This debate took place in the early 1990s, and since then, the AFL-CIO currently is a pro-choice organization. For more information on how to navigate this collection, a finding aid can be found online here: Connecticut State Labor Council, AFL-CIO Records

Connecticut Citizens Action Group Records.  Founded in the early 1970s by Ralph Nader and Toby Moffett, CCAG states that its goal is to empower citizens of Connecticut in their roles as “consumers, workers, tax payers, and voters.”  Information on reproductive rights may be found within the “Health Project” series of the collection, as well as in Director Marc Caplan’s files.  For more information on how to navigate this collection, a finding aid can be found online here: Connecticut Citizens Action Group Records

Samuel Lubell Papers.  Samuel Lubell (1911-1987) a journalist and public opinion pollster.  This collection includes notes, manuscripts, correspondence, and reports belonging to Lubell.  One portion of this collection that is relevant to reproductive rights is public opinion polling he did of students in the 1960s, with abortion being one of the topics polled about.  More broadly, he also worked on studies related to women’s issues in the 1940s and 1950s.  For more information on how to navigate this collection, a finding aid can be found online here: Samuel Lubell Papers

Stephen Thornton Papers.  Stephen Thornton (born 1951) is a community organizer in Connecticut.  Since his days at UConn organizing student protests of the Vietnam War, Thornton has been advocating for various causes, with groups such as the Peoples Bicentennial Commission, the Anti-Racist Coalition of Connecticut, and more.  This collection includes newspapers, alternative press, flyers, correspondence, notes, writings, and other forms of paraphernalia.  Within the collection are some items related to reproductive rights.  For more information on how to navigate this collection, a finding aid can be found online here: Stephen Thornton Papers