The following guest post is by Stefanie Heine who was was awarded a Rose and Sigmund Strochlitz Travel Grant in 2017 to conduct research in Archives and Special Collections. Dr. Heine studied English, Philosophy and Comparative Literature at the University of Zürich. She was a Research and Teaching Assistant at the Department of Comparative Literature in Zurich. After completing her PhD (cf. Visible Words and Chromatic Pulse. Virginia Woolf’s Writing, Impressionist Painting, Maurice Blanchot’s Image. Wien: Turia + Kant, 2014), she started working on a post-doc project on the poetics of breathing and she is now a postdoctoral fellow at the University of Toronto (Centre for Comparative Literature).

Without my knowledge, the GPS of the car I rented at Boston Logan airport was set to “discovery route”. I drove for over three hours, red maple, black oak, sweet birch and white ash making me indifferent to the fact that map turned to maze.

I arrived at the University of Connecticut on the day of the solar eclipse. Caught in those first moments of archive fever, I probably would have forgotten about it, if my partner hadn’t texted me: “You should go out now.” When I did, I couldn’t see. Only for a few seconds the blaze yielded to a clear-cut sickle through the glasses a woman lent me in front of the Thomas J. Dodd Research Center.

These two scenes composing the mood of my arrival at the Charles Olson Research Collection kept determining my exploration of the archive, and they turned out to be instances where Olson’s paths crossed mine. On the one hand, they were points where my own research met Olson’ methods. “methodos […] turns out to be meta hodos […] the principle of—PATH”, “the way the path is known”, Olson explicates in a letter to Robert Creeley in June 1952 (152). The way the path is known involves the person on it and for Olson, research is inextricably linked to the experience of the individual who conducts it, in the very moment it is conducted. On the other hand, there are more specific correlations between what I encountered on the way to and through the archive and Olson’s methodological and poetological approaches. The title of a section of the Maximus Poems, “Each Night is No Loss, It is a daily eclipse, / by the Earth, of the Sun” (448) can be read in line with these approaches. The phenomenon of eclipse could be considered as something that happens on a continual basis when we do research and write: instances of blindness and sudden illumination reoccur, again and again. In an unpublished essay I came across in the archive, Olson explicitly comments on the overlaps of “blindness” and “recognition” in the process of literary production, the creation of poetic form: “A form does only disclose itself if a man does go blind.” (Form, no more than means, is caused) With his emphasis on the writer’s or researcher’s sensation of blindness (literary writing and scientific discovery are inextricably linked for him), Olson counteracts what he considers as the most dominate way in which knowledge is achieved, the ‘Western logos’, in which the rational mind at clear daylight engages in classification and abstraction. This method is what for Olson prevents an immediate involvement of the writer or researcher with their objects of discovery and destroys the “kinetics of the thing” focused on (“Projective Verse” 16). In the archive, the proximity to the new material as such prevented any critical distance for me. The massive amount of writing held in the Charles Olson Research Collection offers too much input to process straightaway; most of the time, I was in a haze, reading and copying as much as I could, assembling material to be ‘investigated’ later. But maybe the point where I was closest to ‘knowledge-bringing event[s]’ in Olson’s sense (he borrows that term from Maurice Merleau-Ponty, for example in A man’s life is a continual allegory) was in the archive itself.

One of these events particularly stands out: in one of Olson’s early notebooks from 1945, a passage on syntax caught my attention. Being aware that this must be one of Olson’s the very first written reflections on literary composition and one of the first attempts to formulate principles for his own writing, I was excited. But my enthusiasm was soon overshadowed by a banal fact: Olson’s handwriting, which needs some time to get used to in general, is specifically hard to decipher on these two pages of the tiny notebook covered densely with words in pencil. I was entering a domain where language becomes utterly private and is almost impenetrable because of its singularity. “Syntax is a key”, Olson writes – and it seemed to me at first sight that it would be denied to me to unlock the gate presented by Olson. “I have a hunch I allow too much of … into my syntax.” I was too curious about what he thought he allows too much of in his syntax to turn away from the passage. When I met Melissa Watterworth Batt on the next day, knowing her experience with Olson’s manuscripts, I asked her to help me with the passage. The collaborative effort turned out to be fruitful – in the process of thoroughly scrutinizing the text, one word after the other came to light. We turned the notebook around in our hands to change the angle so that a fresh perspective might change curves into letters and a magnifying glass helped to make visible what our eyes failed to see. We zoomed in and out digital images of the page on laptop and iPhone – lines turning into pixelated patches and then to a “b”, an “l”, an “o”. The last hitherto obscure word became legible when I was back in my hotel room in Vernon, and there it was:

I tend to think that I need to maintain a more natural syntax than the process of my thinking + feeling sometimes accomplishes. I have a hunch I allow too much of the complication of both to intrude into my syntax. Yet how to arrive at an objective language without changing the syntax? Nouns, verbs, and images are the answer (see Yeats or Pound for this). Actually, of course, all this is technical + the thing will come out of me as a poem. Otherwise, no. So I must continue + be led by my nose, willy-nilly. I have no choices. Hammer each step of the way. You have rid yourself of the orphic, a little. Continue to beat with the hammer to get the proper sculpture.

The proper sculpture – the image Olson uses to describe a poem in process ceased to be a metaphor when I had the deciphered passage in front of me. In fact, the whole process of deciphering echoed the activity of a stonecarver. Or, rather, the archeological experience with Mayan glyphs Olson describes in his letters to Robert Creeley in 1951. Tracking the shape of penciled lines was a sensual experience of words as things, graphite on paper, it was a physical engagement with Olson’s written material that may come close to what Olson perceived in Lerma while digging out the stones on which the glyphs are engraved, holding words in his hand as solid objects. The transformation of curves into letters and words I observed while deciphering allowed me to partake in a “kinetics of the thing”. I was involved in an act of paying attention to “what happens BETWEEN things”, which, according to Olson is one of the last “acts of liberation science has to offer” (“The Gate and the Center” 169). Between things: between the words on the page, between my eyes on the page and the digital image, between my eyes and Melissa’s. 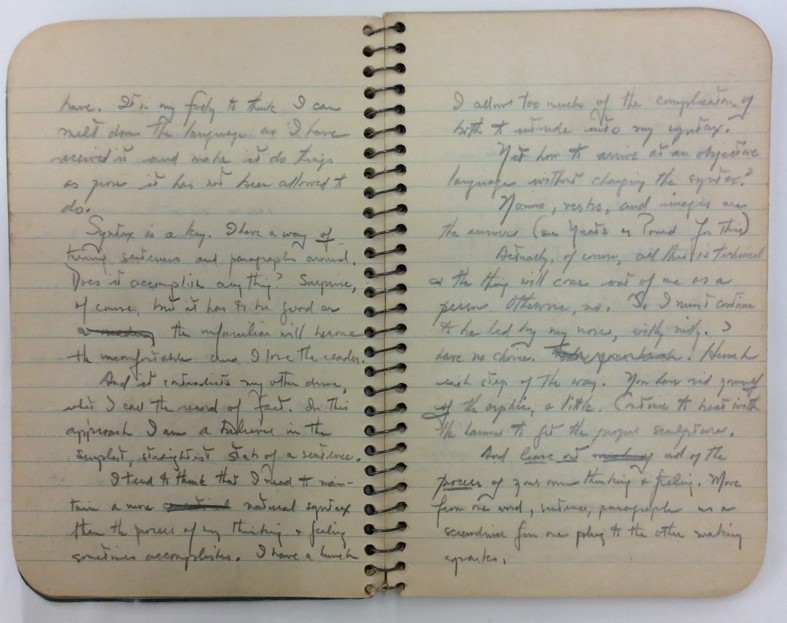 The process of deciphering is not the only way in which I experienced the archival material in its physicality. A preoccupation with Olson’s papers does not only involve investigating the contents of his thought. The writings archived in Storrs do not only occupy the mind, they are things to be experienced with all senses. The material dimension of his texts does not only become perceptible through the resistance caused by Olson’s handwriting – when the words’ meaning is interrupted by their particular shape. It is primarily the things Olson used to write on that strike the eye: besides notebooks, notepads and sheets of different size, colour and texture, and objects he found in front of him like a paper placemat, he scribbled notes between the printed words of flyers and booklets, even his passport. 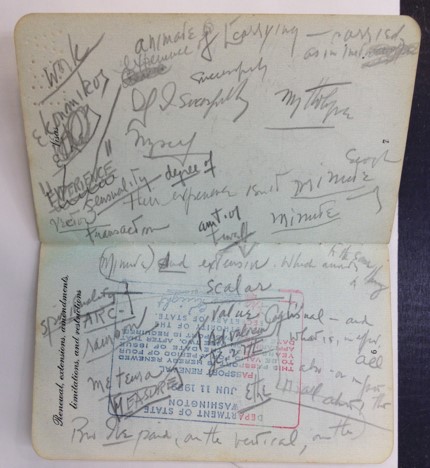 After this personal account of my “discovery route” through the Olson archive, a few words on the research project that led me to Storrs: In the first chapter of my planned book titled “Poetics of Breathing” I investigate how breath is discussed as a compositional principle in the context of the Black Mountain School and the Beat Generation. The focus is on concrete attempts to establish an embodied poetics of breathing. In this context, I explore how Olson sketches compositional principles based on breath in essays, poetological manifestoes, notes and letters about his own writing practice. The unpublished material I found at the Charles Olson Research Collection gives me further insights in the development of Olson’s poetics of breathing and the Rose and Sigmund Strochlitz Grant I was awarded enabled me to make important steps on the path towards my book.