We received notification that the stairwell construction scheduled for the summer has been delayed until 2020. There were minimal physical changes made to the facility in preparation so we will be shifting back to business as usual. We have confirmed the Q Center will move back to the second floor starting July 1.

In brighter news, we are pleased to have some refresh happening throughout Babbidge, particularly a fresh coat of paint in the research carrels and group study spaces as well as exterior window cleaning planned to take place later this summer. We have also purchased new backpack vacuums with HEPA filters and have already begun cleaning materials and stacks on level B.

Work is still happening on getting the contracts in place and we received a tentative start date of June 24. That means that the significant noise impacts will likely be centered around mid-July through early August. This is still not a firm date and will likely shift in either direction.

A few preparations to note.

The stairwell construction slated to start on Monday is delayed as a result of issues in the bidding phase. Work cannot begin without all contracts in place and we are in a situation where we need to carefully review the bids we have and seek out additional services. We do not have a new start date but anticipate work will be delayed for a few weeks. We have been notified the manufacturing of the steel beams has moved forward so they can be ready when needed.

The map below is the area around the construction. There is a lot of great information on this including the locations of the temporary fencing and dumpsters, egress, and the fate of the trees on the east side of the plaza.

The University will be performing air quality testing before, during and after construction in both Babbidge and Dodd.

In addition to the increased noise levels during some of the construction, there will be a few service impacts. During the erection of the steel portion of the staircase (estimated to be around June 27-July 8), the public side of Level B will be inaccessible from 7am-3pm. During that time collections in that space will be unavailable and we will set up a paging system after 3pm. We will be adding noise cancelling headphones into circulation. The Q Center will be closing after finals to begin their relocation to the 3rd floor and will be looking for alternative space over the summer. The W Center will be looking at their hours for when they reopen in June to try and work around the construction schedule. Bookworms will be closed all summer.

We are working on a temporary locations for staff during periods of increased noise that will include conference rooms, classrooms, and workspaces.

This summer we will begin work on the construction of a new staircase in Babbidge Library. The work will begin on May 13 and is anticipated to continue through January 2020. The bulk of the work will be done during the summer months and times when students are not in the facility to minimize the disruption but there will be work throughout the whole period of time. 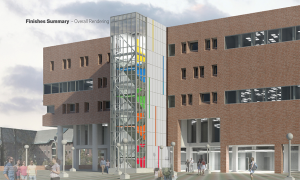 The staircase will be built on the south side of the building and is designed as a way to get from floor to floor but also as an addition exit in the event of an emergency. It will require that the Q Center relocate and we will provide more information on that as we move through construction.

For Library staff and other offices in the building, we will be holding two briefings to discuss the timeline and how it will affect the building:

We will be adding regular updates here as the construction moves along.

That’s right! Things are starting to take shape up on Level 1. Ceilings are certainly not the first place you look, but it is the first place you work during construction. So the lights have all been replaced with environmentally friendly LED lighting, the ceiling has been painted, as has many of the walls. And one of the biggest projects was the overhead fire door installation. That was completed today and it looks pretty nice. 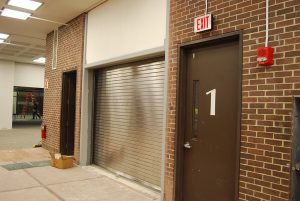 The new overhead fire door on Level 1. With this in we can re-open the center stairwell.

The carpet came in too! Boxes and boxes of it. What do you think? 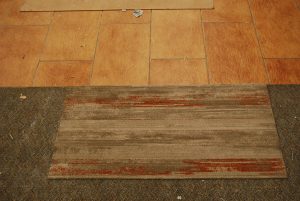 Check out the new carpet! (pardon our mess)

We are also seeing the data visualization lab taking shape. This is going to be a centerpiece of the floor! 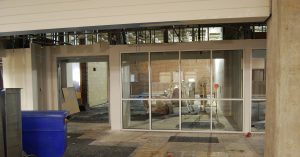 The data visualization lab is starting to take shape!

We are looking good and on target!

Happy Friday! If you happened to be in Homer Babbidge today I hope you brought a sweatshirt! The steam shut down was longer than anticipated so it was pretty chilly.

Today we had the pleasure of showing Simon Neame, Dean of the UMass Amherst Library around the changes while he visited and we snapped a few photos to share. 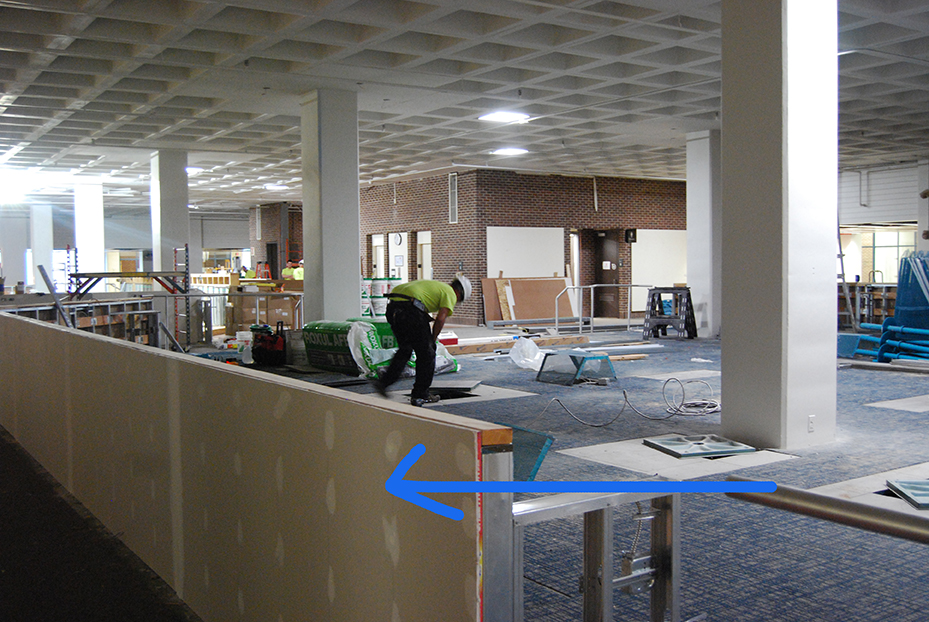 See that wall? This is what will soon become bar top work stations all around the raised floor where the desktop computer were. 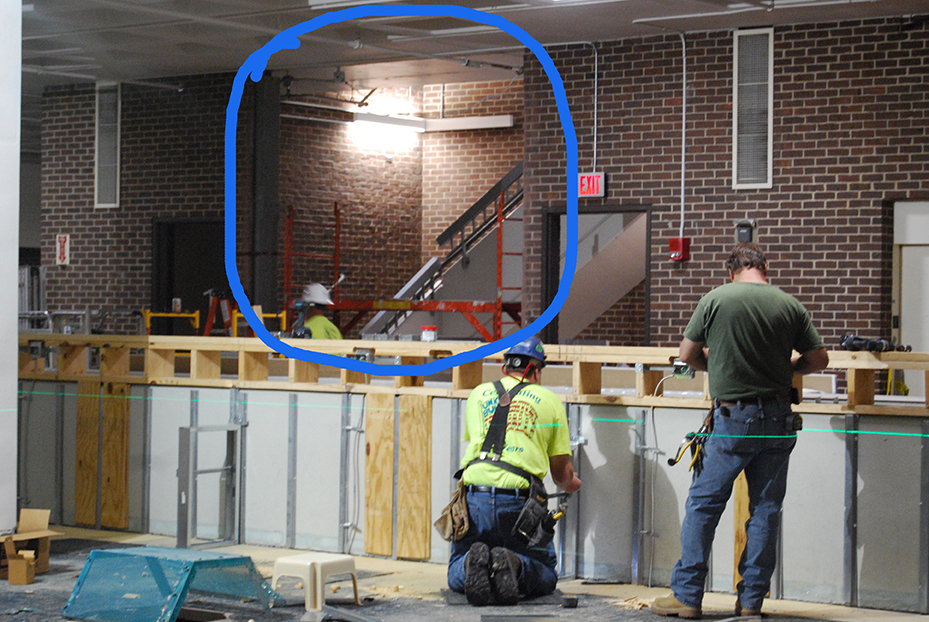 This is wild – see that circle. That used to be a brick wall and now it’s open. This is partly why things have been so loud and why the center staircase has been unavailable this week. 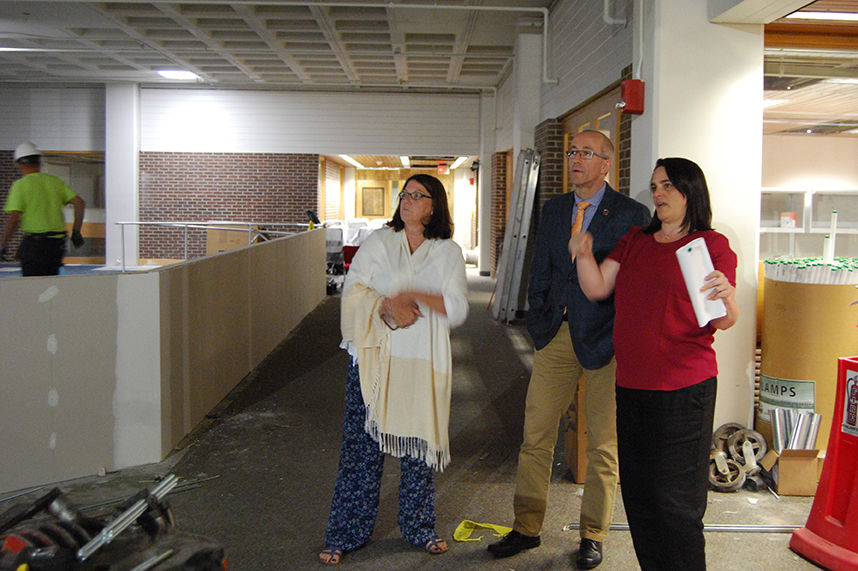 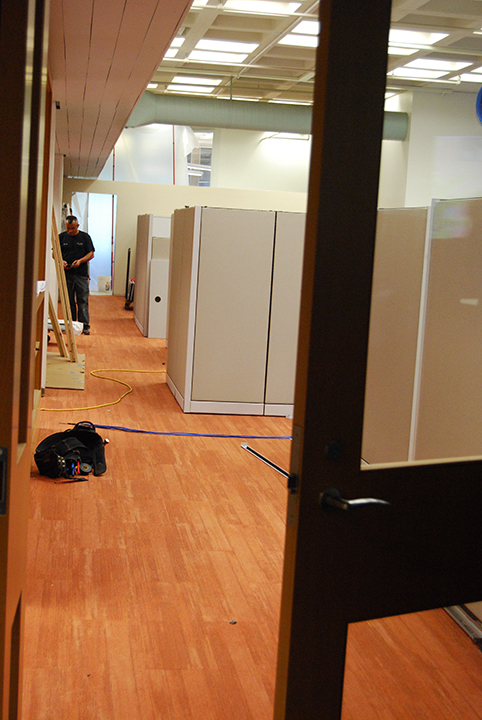 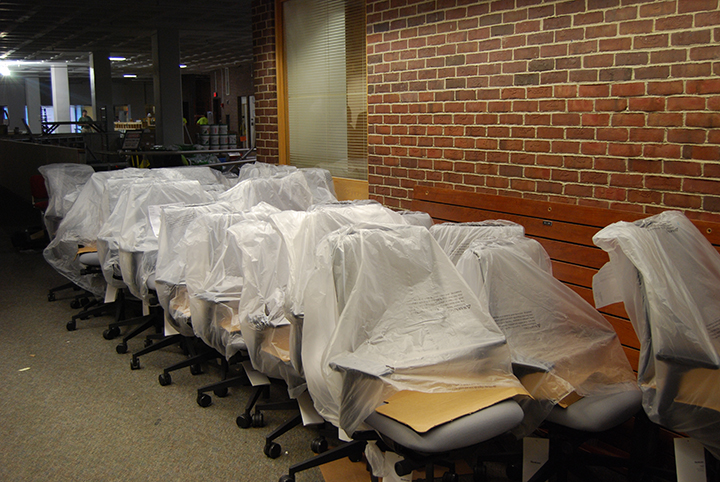 This week we have started to see a few finishes, but mostly structural work on Level 1. The paint that you may have smelled when coming in is from the fresh coat on all of the ceiling on the floor. Looks nice, clean and bright. Take a look at the progress. 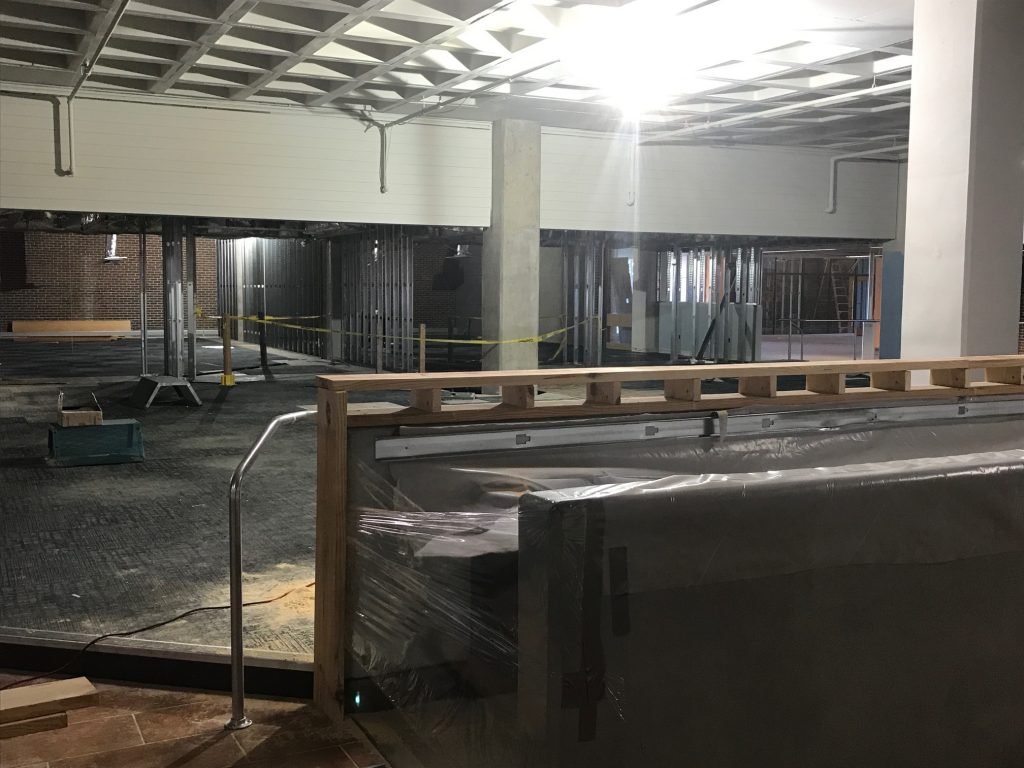 From the center staircase, looking East, walls are being framed where new computer spaces will be 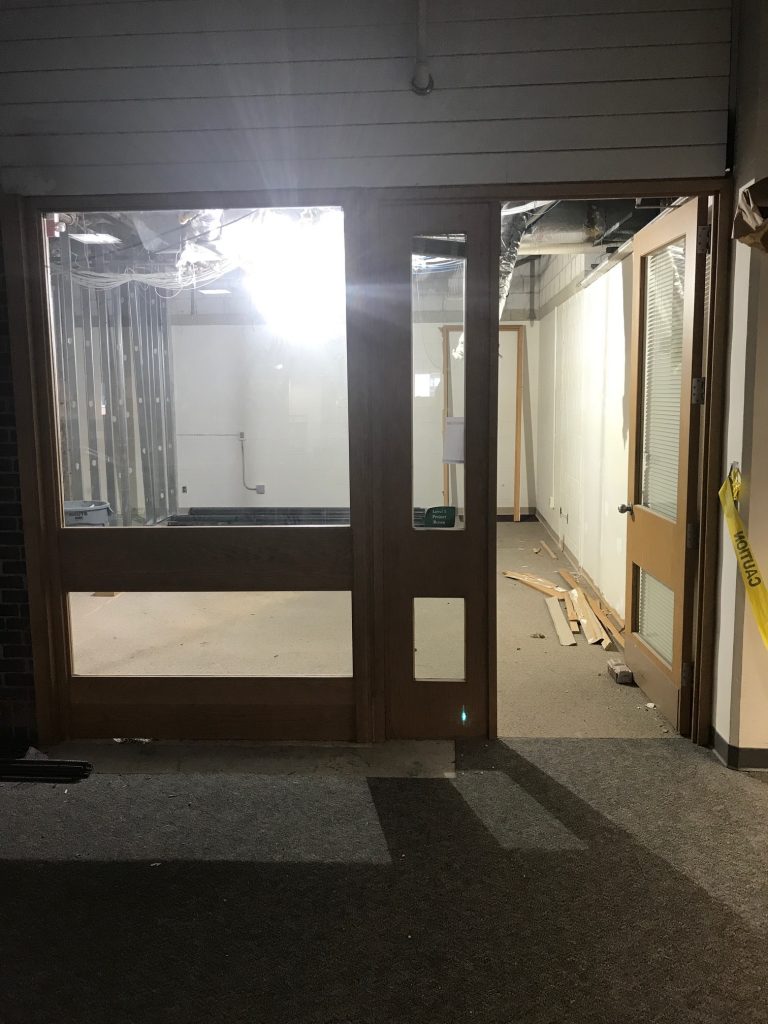 The new glass window where our new MakerSpace will be located 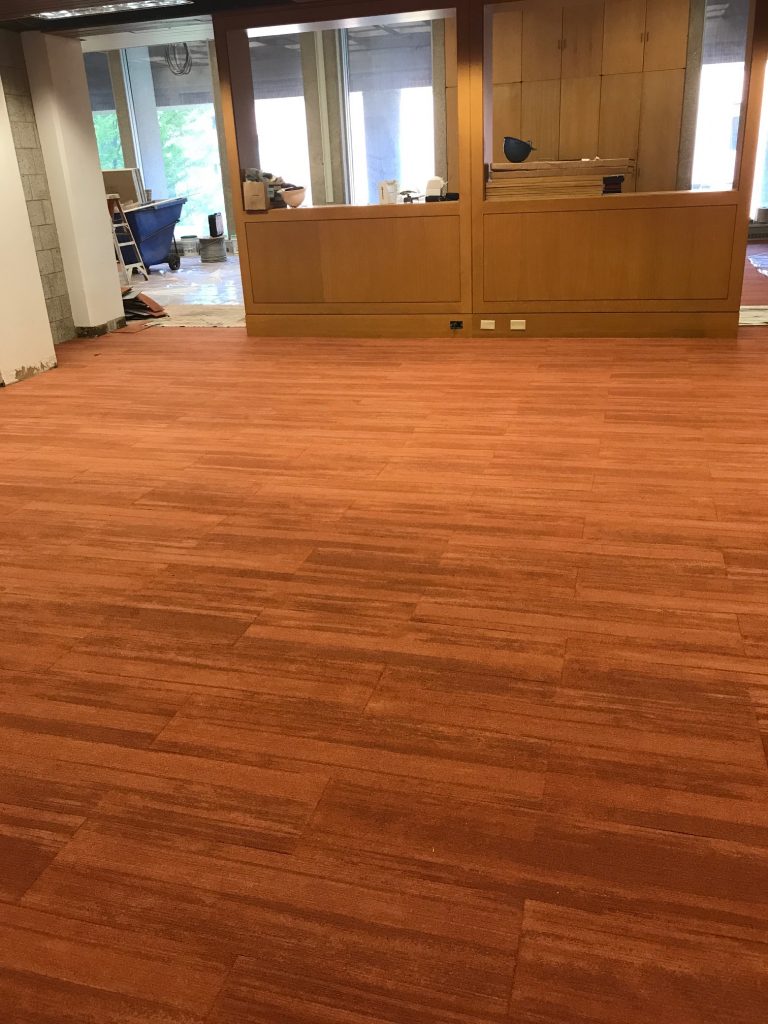 The new flooring in the UITS Service Center looks like wood, but is actually carpet! 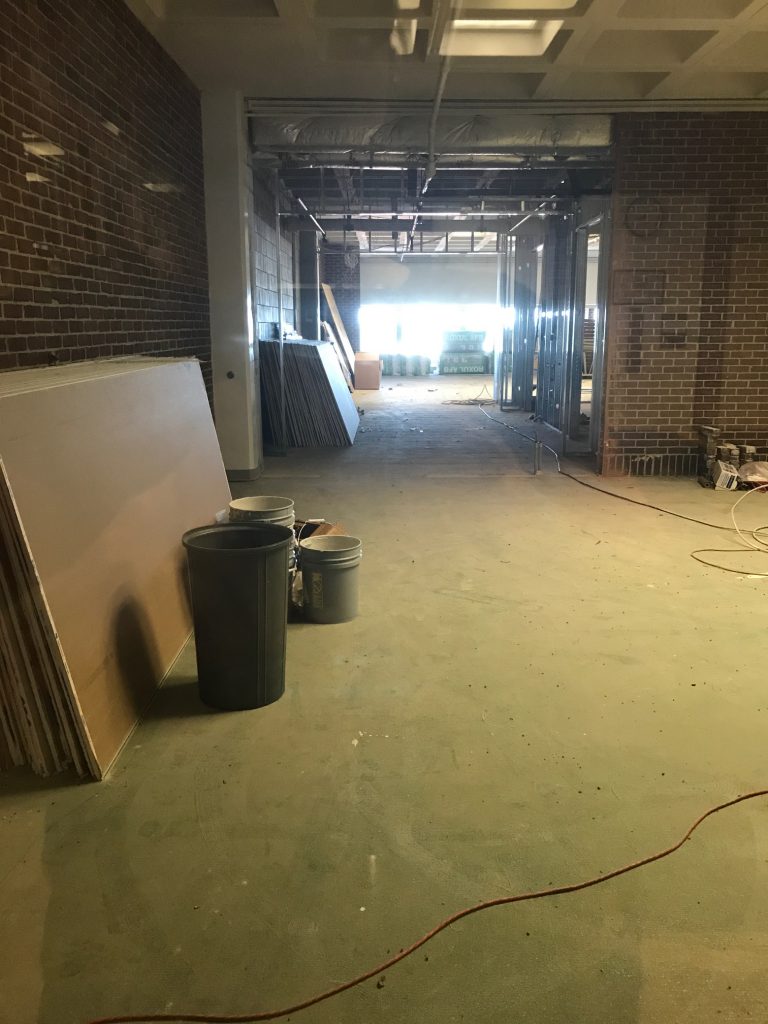 This is the view into the new event space on Level 4.

So what has all the noise been about? Two major demo projects – the first is what is happening in the photo below. You may recognize the lower blue concrete wall that encases the center staircase coming up from the Plaza. The grey cement behind it is now gone. It will be open similar to the entrance to the stairs on the Plaza. 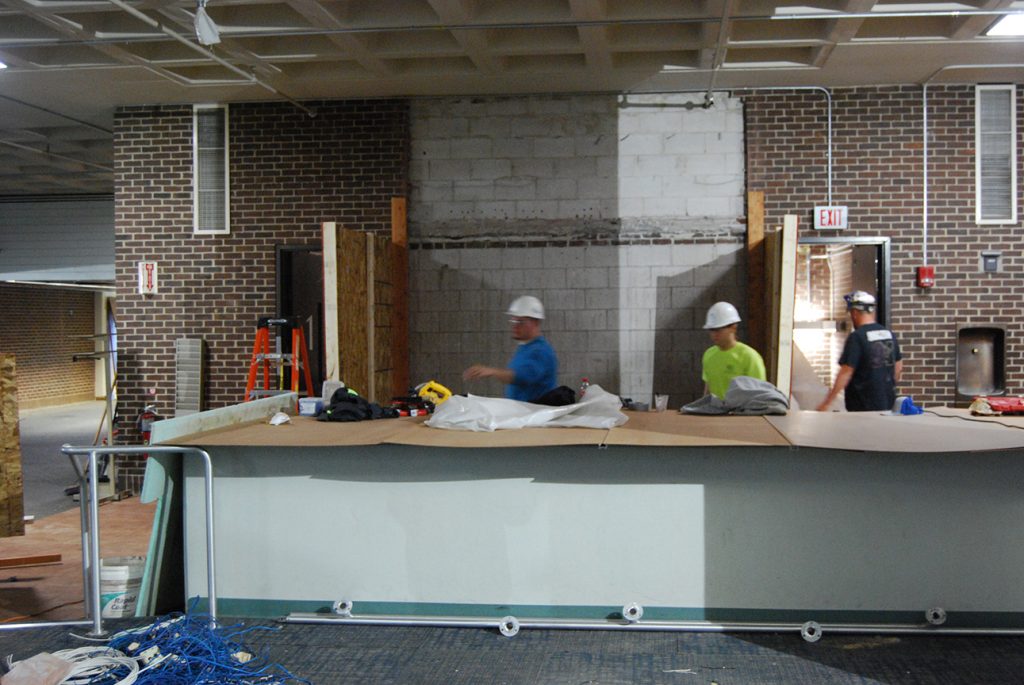 There is also work being done to add another unisex and accessible bathroom on the floor. Work in these two areas is where the jackhammer drilling is happening. We expect that there will be more drilling next week so be prepared for noise.

There is also a shell started for what will be a new computer bar that runs around the perimeter of the computer cafe. These will be high-top seating with stools, and lots of power to plug in. 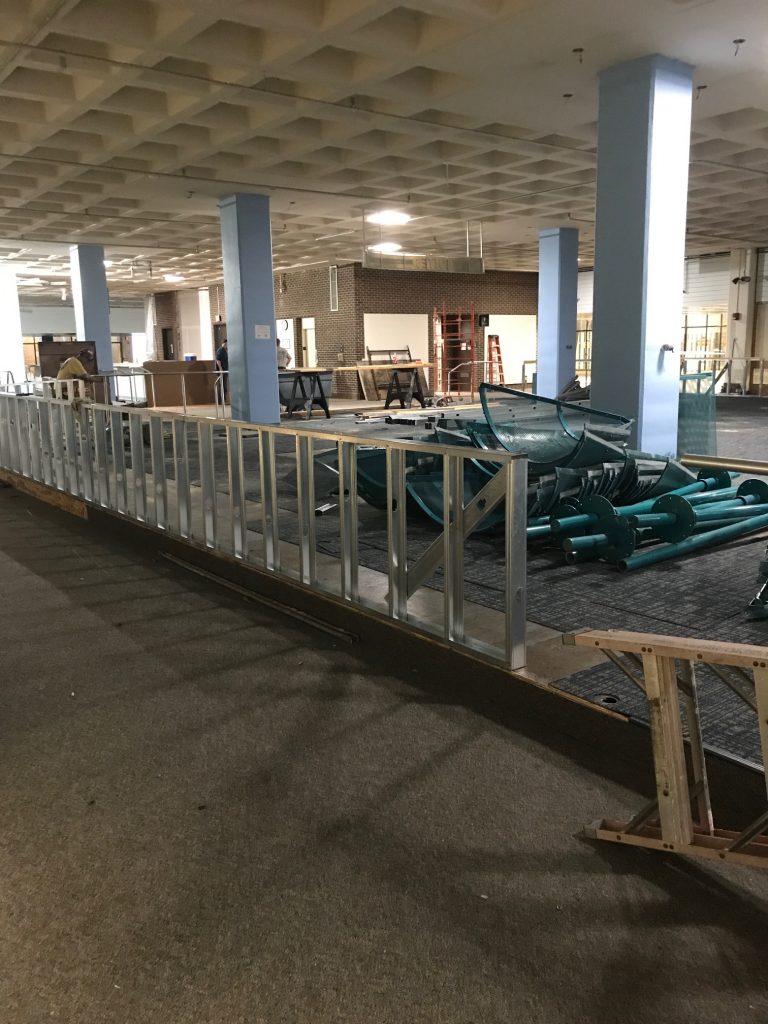 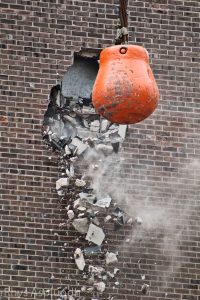 So maybe not quite like this, but today we expect the start of some demolition on interior brick walls on Level 1 so the noise level will be very high. We apologize in advance for this.