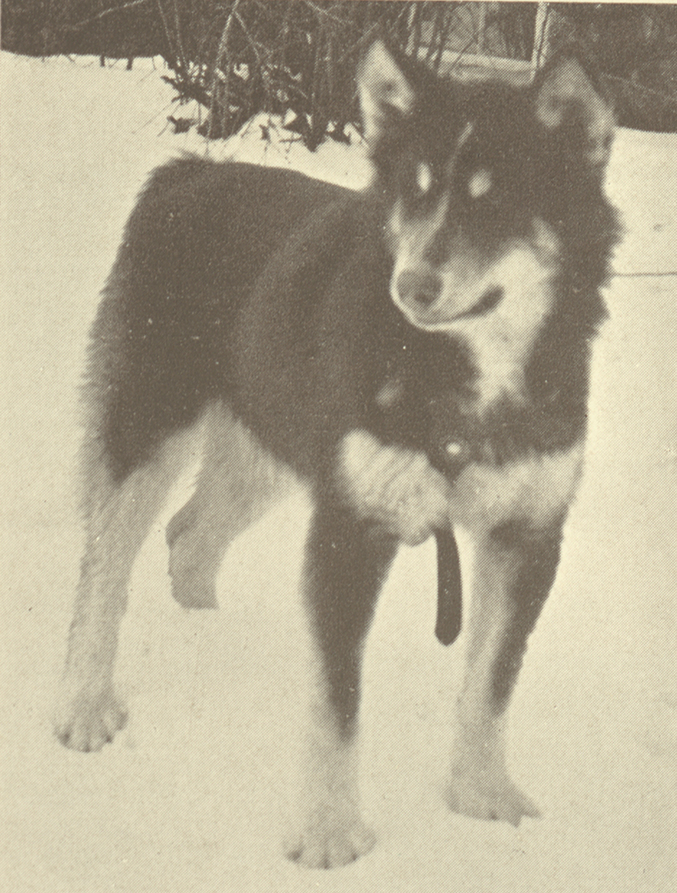 Article in the November 27, 1934, Connecticut Campus about the choice of a Husky dog as the Connecticut State College Mascot 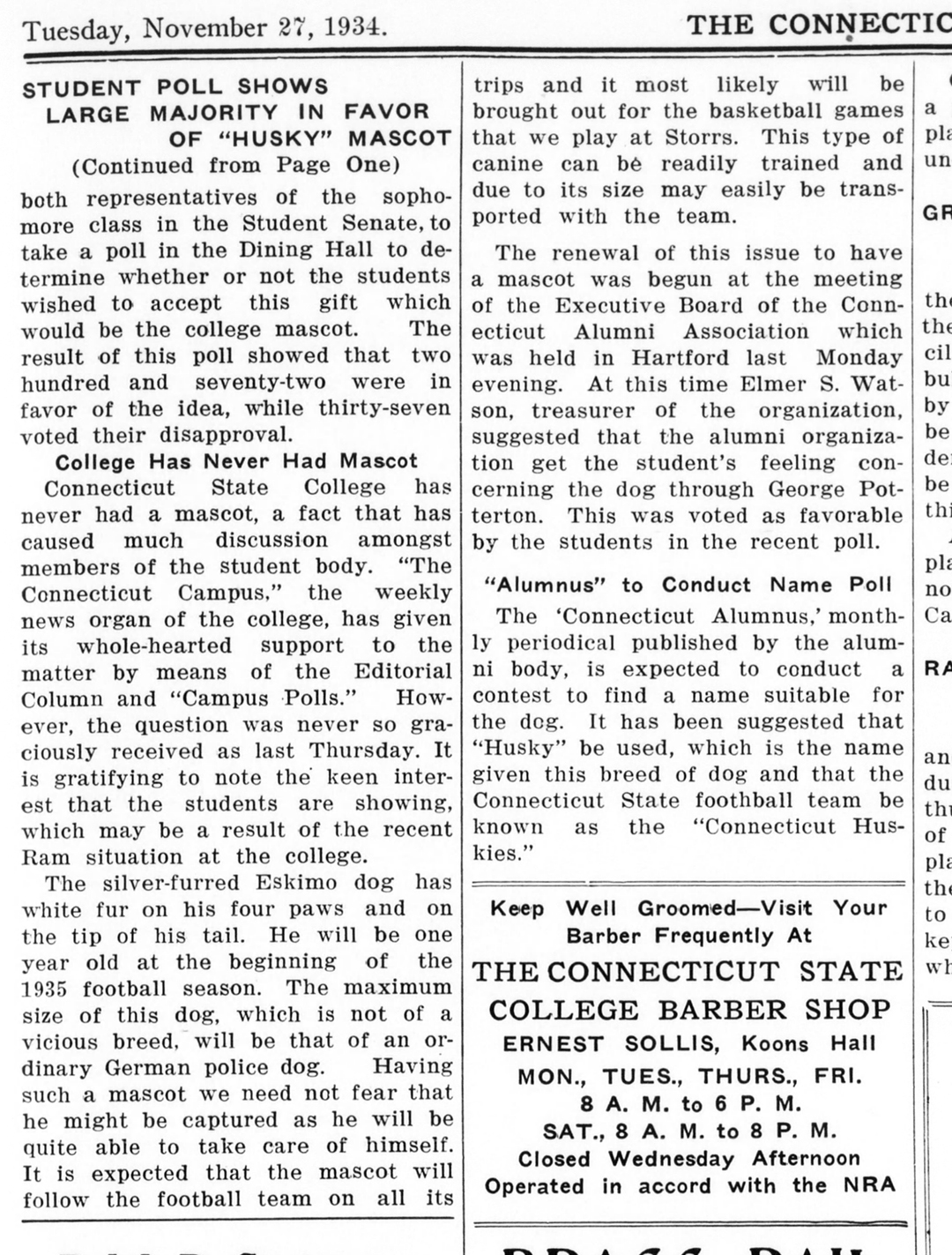 Continuation of article about new mascot in Connecticut Campus, November 27, 1934 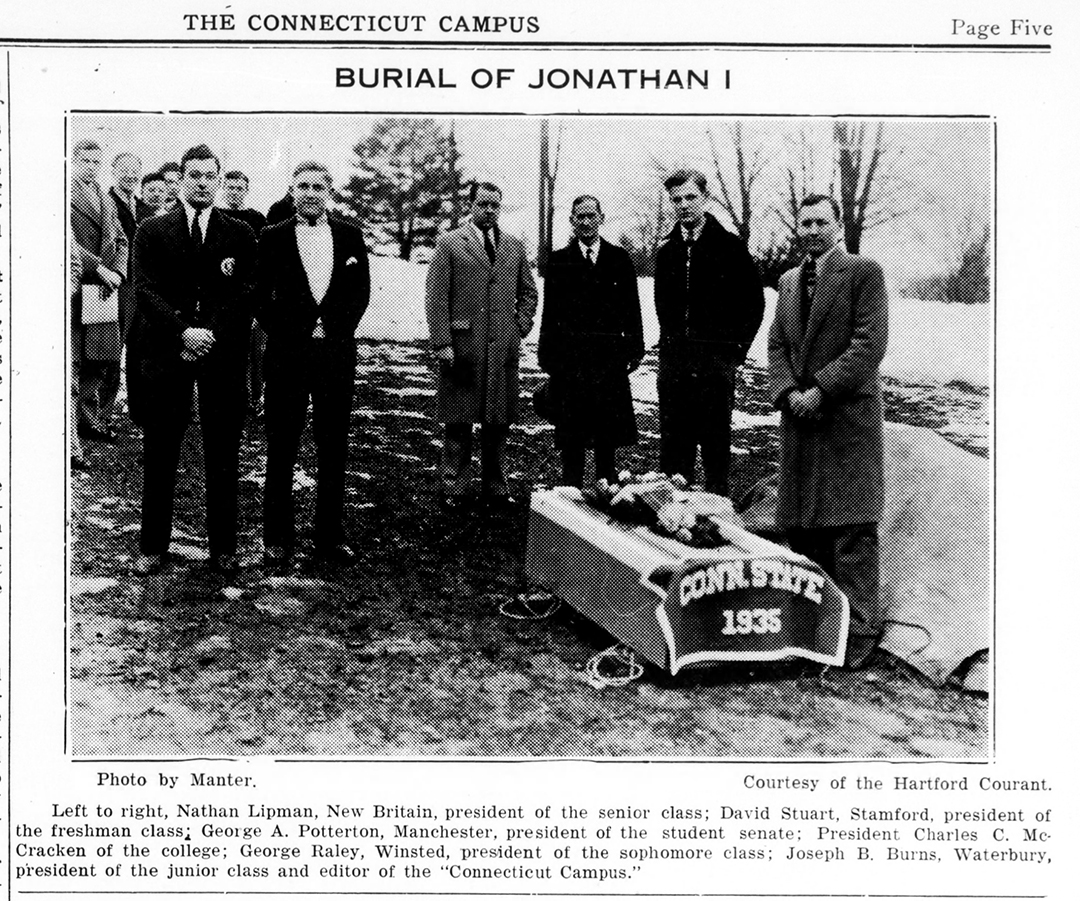 February 19, 1935, article showing the burial of Jonathan I 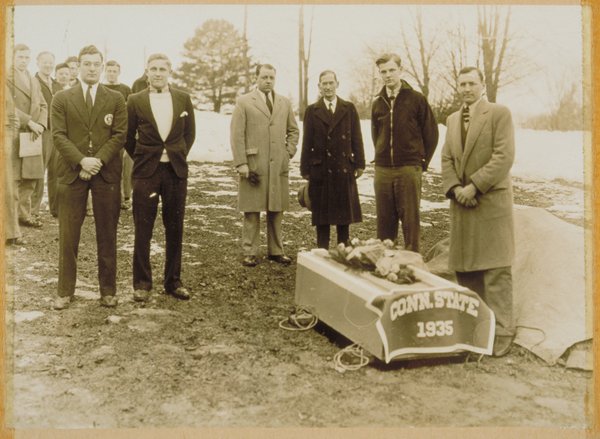 The funeral of Jonathan I, the Connecticut State College first mascot, on February 15, 1935

In the Fall of 1934, after the famous “Ram-napping” incident where students from the Connecticut State College kidnapped the ram mascot of the Rhode Island State College (you can read the story here) prior to a football game between the two rivals, the CSC decided it was time to get its own mascot. Its one attempt at securing a mascot was in October 1906, when a fat white bulldog, who received the unfortunate name of “Piggie,” was hired for the job. Piggie didn’t last long because the students felt it would have been confused with Yale’s bulldog mascot, “Handsome Dan,” and no one liked the name Piggie.

By late November 1934 the student newspaper, the Connecticut Campus, announced that a 14 week old thoroughbred Eskimo dog “of high pedigree,” born on July 23 in Huntington, Connecticut, and donated by the college’s alumni, was chosen as the CSC mascot by an almost unanimous vote of the student body. The students were delighted by their new black and white Husky mascot. It was determined at that point that the athletic teams would be known as the Huskies.

It was purported that the dog’s great-grandfather was one of the team that pulled the sled of famous American explorer Robert Peary, who claimed to be the first to reach the North Pole, in April 1909.

Around Christmas 1934 the dog settled with the family of Music Professor Herbert A. France, who lived with his wife and four children in North Windham. In 1995 Professor France’s son, Herbert France, Jr., sent a reminiscence to the UConn Archives about life with the first mascot. Mr. France was six years old at the time they owned the dog, who was very much a family dog to the France children. Mr. France recalled a snowy day in January 1935 when he hitched the dog to his sled and tried to get the dog to “mush.” The dog apparently turned around, looked at the boy, jumped over him and the sled, and took off with the sled bouncing behind him, with little Herbert left face down in the snow.

Now that the college secured the dog they also had to give him a name. In January 1935 the Alumni decided they would hold a contest among the students to determine the name, which was to be announced by February 15.

Alas, even before the dog could be formally named his life was tragically cut short. On February 13, 1935, the poor dog dashed into the road in front of the France’s house and was struck by a car. Attempts were made at resuscitation but were futile. The dog died at the tender age of six months. He apparently had been to only a handful of basketball games in his short time of service as mascot.

The CSC students were stunned and saddened by their mascot’s sudden demise. Two days later, on February 15, at a small and somber funeral attended by CSC President Charles McCracken and the presidents of each student class, the dog was formally named Jonathan, in honor of Connecticut’s first governor, Jonathan Trumbull. George Potterton, President of the Student Senate, gave a short speech where he said that Jonathan “…was a symbol of the forward progress that we as students are bound to make. He was a symbol of the coming greatness of our athletic teams as well as those other activities in which we enter in order to make our college greater. Connecticut State’s Jonathans will go out to do battle on the court, field and gridiron, for Jonathan’s is a fighting tradition.”

The next Jonathan, number II, arrived at the college in the fall of 1935 and ably served as mascot until 1947, when he died of natural causes. Apparently three more Jonathans – III, VI and X — also met tragic ends as the victims of car accidents.

You can read more about Jonathan I, and the tradition of Jonathan as the Connecticut State College/University of Connecticut mascot, at these sources:

Articles in past issues of the UConn Advance, written by staff writer Mark Roy, at

The January 8, 1935, issue of Connecticut Campus with a photograph of the new mascot and information about the contest to name him: https://archives.lib.uconn.edu/islandora/object/20002%3A860217885 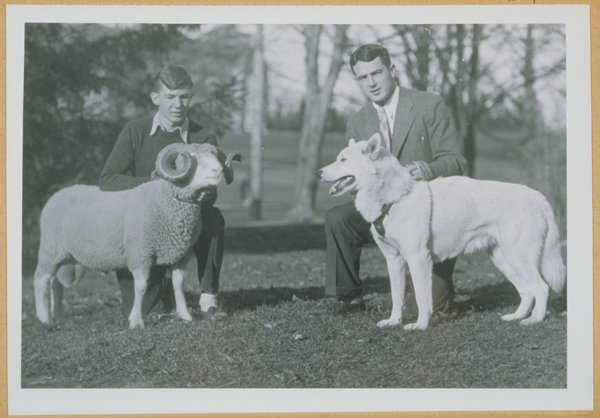 It’s a little known historical fact that in the mid-1930s, when the Connecticut State College (an earlier name for what became the University of Connecticut) was pondering what would be its mascot, the ram shown above, named Sir Ram-a-lot, was seriously considered, edging out in student polling over the next most likely mascot, the Eskimo husky dog known as Jonathan.  The student newspaper quoted freshman Francis Pickering as saying “What kind of stupid name is Jonathan for a dog?  I think Sir Ram-a-lot would invoke the kind of fear and respect we need on the football field against opposing teams.”  Fortunately the students’s preference for the ram was contested by the new college president, Albert N. Jorgensen, who made the decision to allow the animals to decide between themselves with a vigorous game of rock/paper/scissors.  Jonathan was victorious, thus beginning his eighty year reign as UConn’s beloved mascot.

[We hope you enjoyed this April Fool’s Day post.  For the real story of what’s going on in this photo, visit our digital repository and see the photo at http://archives.lib.uconn.edu/islandora/object/20002%3A199722613]