To facilitate successful completion of business surveys, while also helping the media and public to understand the importance and impact of the Economic Census, the Census Bureau will be hosting a series of Webinars throughout the survey period this fall. The first in the series will be held on Thursday, October 11, 2012 at 1pm EDT, and will help prepare businesses for receiving and completing the survey during the coming months. It is geared towards the members of organizations that will be involved in completing their survey. 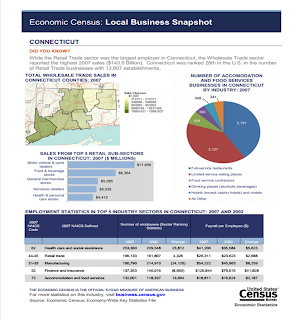 Every five years, the U.S. Census Bureau conducts the Economic Survey to assess the state of the nation’s economy and businesses. The survey involves the over four million businesses that operate in this country, regardless of industry, organization size, or location. Information gathered through this survey informs both individual business decisions and economic policy at all levels of government.

In anticipation of the latest economic census being taken this October, November, and December, the Census Bureau has launched business.census.gov, an all-encompassing resource gateway for business owners, economists, policy analysts, chambers of commerce, the media and the general public. There, they will be provided the opportunity to participate in the survey, to make use of past Economic Census data, or to simply better understand the economy of one’s own community. The Snapshots Center provide quick access to state- or industry-specific briefs on economy activity.

This year’s Connecticut GIS Day event is scheduled for Friday, November, 16, from 9 AM to 3 PM at the Marine Sciences Building at the University of Connecticut Avery Point Campus. The keynote speaker will be DANA TOMLIN, credited with the creation of Map Algebra! If you were lucky enough to attend the Spring NEARC event at Smith College and hear his presentation, then you already know that Dana is well worth hearing! This is also a great venue to present a poster or presentation as well as network with GIS users from state agencies, regional planning agencies, municipalities, non-profits, universities, and organizations from across the state of Connecticut. Included below are details on the call for posters, presentations, and table displays:
CALL FOR POSTERS & PRESENTATIONS

We are officially launching our call for presentations and posters for GIS Day. The presentations should discuss a GIS project, tool, custom process, or similarly themed topic. We are looking for a 15 minute presentation with 5 additional minutes for questions and answers. Posters are also sought. They must be mounted on some sort of rigid material (i.e. foam board, etc.), approximately 24” x 36” in size (slightly larger will be accepted, but no smaller). Also, NEW this year, we are looking for poster presentations (5 minutes in length) from GIS or related subject students from Connecticut Universities. If you are looking for GISP points, this could be a great way to add to your total!
CALL FOR TABLE DISPLAYS
We are asking for interested parties that wish to host a table to display information. This is open to anyone this year! We ask that your display maintain an educational theme. Show us how you use GIS in your organization or group!

If you are interested in participating or have additional questions, please feel free to Thad Dymkowski at TDymkowski@NewingtonCT.Gov