Nearly 4 million businesses have received forms for the 2012 Economic Census, the U.S. Government’s official five-year measure of American business and the economy. By law, these businesses must respond by February 12. And because recipients include many of your members, or readers, here’s some important information for them:

Thanks for helping us inform businesses – their response really does make a difference.

The Connecticut GIS User to User Network and the Connecticut GIS Council Education and Outreach Working Group’s latest issue of GeoFocus, CT’s Quarterly Geospatial Newsletter is now available. Included below are just a few highlights from the Winter 2012 (December) issue: 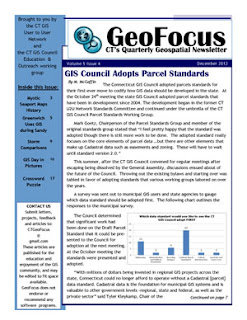 Check out the latest issue today!
View PDF Version of GeoFocus
Interesting in contributing to CT GeoFocus?
If you are interested in submitting articles for the next issue of GeoFocus, details are provided on page 1 of the newsletter.

In January 2013, one birth is
expected to occur every eight seconds in the United States and one death every
12 seconds.

To view the latest projected population of the United State or the World visit the U.S. Census Bureau’s population clock at: http://www.census.gov/main/www/popclock.html