This is the third in a series of posts on using Tableau Desktop or Tableau Desktop Public Edition to map Connecticut data using custom polygons, to accommodate geographic entities not recognized innately in the Tableau mapping functionality. See these other posts for more information on creating filled maps for Connecticut towns and Census Tracts in Tableau:

Tableau and Tableau Public offer robust mapping capabilities, including the ability to recognize geographic entities in your data and instantly create choropleth (filled) maps with shapes for counties, states, and countries. For users that want to create filled maps for geographic entities not recognized innately by the software, Tableau supports the creation of polygon-shaded maps, allowing users to map data onto polygon shapes which correspond to sales regions, marketing areas, etc. The Connecticut State Data Center has created a number of custom polygon map files corresponding to Connecticut geographies not innately supported in Tableau, including Connecticut school districts:

The directions below show you how to connect to this file to create a custom polygon map for school districts, and then join the Polygon data with some sample demographic data from the American Community Survey to create a filled/choropleth map. This is followed by additional tips to joining the polygon shapes with additional data sources, such as data from Connecticut Open Data, CTDataCollaborative, and Connecticut Department of Education.

END_OF_DOCUMENT_TOKEN_TO_BE_REPLACED

This is the second in a series of posts on using Tableau Desktop or Tableau Desktop Public Edition to map Connecticut data using custom polygons, to accommodate geographic entities not recognized innately in the Tableau mapping functionality. See these other posts for more information on creating filled maps for Connecticut towns and school districts in Tableau:

The U.S. Census Bureau aggregates and publishes Decennial Census and American Community Survey data at geographic levels large and small, including Census Tracts – small statistical subdivisions of roughly 1200-8000 people. Connecticut has 833 Census tracts; many small towns comprise a single Census Tract, while Hartford has more than 30. There are more than 7,500 data tables available through American FactiFinder for Connecticut Census tracts on demographic and economic measures including income and poverty, educational attainment, health insurance coverage, housing characteristics, and more. The steps below will let you create a choropleth map in Tableau for any Census Tract-level data downloaded from American FactFinder, enhancing the functionality of Tableau to analyze and visualize ACS and Decennial Census data.

Tableau support documentation includes instructions on converting ArcGIS shape files into spreadsheet files that Tableau can use to construct custom polygon maps. The Connecticut State Data Center has converted a number of U.S. Census Bureau TIGER/Line shape files into polygon data files for use in Tableau, including polygon  files for Connecticut towns, school districts, Census tracts, and legislative district boundaries. If you would like to visualize Connecticut Census Tract-level data on a map (as in this dashboard) in Tableau, this Excel workbook:

of Connecticut Census Tract polygons contains a Polygon spreadsheet that will render a map of all Census tracts within Connecticut, and an additional sheet of housing value data from the American Community Survey that you can link with the polygon map, following the steps below, to create a choropleth map like the one below (click image to see full size). Additional information will help you download more tract-level data from American FactFinder, and join and map it with the Polygon data. 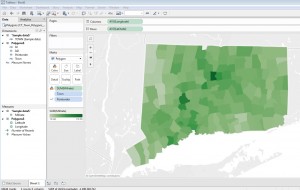 Each of the 29,202 rows of the Excel Polygon sheet describes a single point on the outline of a single tract’s boundaries, with a field for longitude and latitude of the point. Another field for each row is Point Order, which tells Tableau in which order to ‘connect the dots’ to form each tract on the map. For example, Mansfield’s shape has 208 points in the data set. Tableau draws each polygon by starting with the latitude and longitude of point 1, then continues drawing the shape until it gets to point 208, completing the outline of the town. The software does this for all 29,000+ points on the map instantly, whether in Tableau Desktop or Public, and map tools seem to work as quickly with a polygon map published to Tableau Public as any boundaries innately recognized in Tableau.

Step 1: Setting up the polygon map:

END_OF_DOCUMENT_TOKEN_TO_BE_REPLACED

According to the U.S. Census Bureau’s American Community Survey estimates, income inequality increased significantly in 142 U.S. counties between the 2008-10 and 2011-13 survey periods. While this is relatively small compared to the number of counties where there was no significant change (1,688), almost 92 million people – nearly 30% of the U.S. population at the time – resided in these counties in 2013. Eleven counties – with a combined population of 565,00 – had significantly reduced income inequality over the 2011-2013 ACS survey period, compared with 2008-2010. Click any county in the map below to see a link to the original ACS data in the American FactFinder data engine.

The 3-Year Estimates data series (now discontinued) reported data for counties with populations of 20,000 or more, so counties with smaller populations are excluded from the analysis. The counties in the map below had an aggregate total population of 301 million in 2013, compared with the total U.S. population 314 million at the time. The release of the ACS 2011-2015 5-Year data set in December 2016 will allow similar analysis for all U.S. counties, including those with populations under 20,000. Data from this survey will be able to be compared to results from the 2006-2010 5-Year data.

The Gini Index represents the concentration of income in a given state or country, in a range from 0 to 1. A higher Gini index indicates greater inequality – where income is concentrated among a relatively few individuals or households; a lower Gini score represents more even income distribution. The Gini index is a commonly used economic measure, reported by organizations such as the World Bank and CIA, in its World Factbook.

This visualization compares county-level median household income from the 2004-2009 and 2010-2014 American Community Survey 5-Year Estimates and compares the confidence intervals of the surveys to determine whether there was a significant increase or decline in median household income between the surveys, or no statistically significant change. Estimates from the 2004-2009 survey were converted to 2014 inflation-adjusted dollars using the Bureau of Labor Statistics’ ‘Consumer Price Index – All Urban Consumers‘ benchmark. These adjusted figures were compared with the median household estimate from the 2010-14 ACS (which were originally published in 2014 inflation-adjusted dollars).

Note that this visualization’s inflation adjustment uses national level Consumer Price Index, which may not reflect inflation differences that exist across geographies or regional differences in housing, transportation, or other sectors. The American Community Survey confidence intervals used here are the originally published data, which was reported at a 90% confidence interval.