During this workshop, there will be breakout sessions with hands-on demonstrations focused on five application areas:

This workshop is targeted at individuals with some interest GIS, so if you are new to GIS and want to learn more be sure to register for this free workshop! Registration is capped at 100 people so be sure to register at: http://gis1.students.ccsu.edu/U2U/CoffeeDonutsAndGIS/

Jeff Dunn, one of the founding authors of Outside the Neatline has been invited to join Veryspatial.com as a contributing author.  This is exciting news as Veryspatial.com is the leader in reporting the cutting edge of technology, trends and events in the geospatial realm. Veryspatial.com posts news items, hosts regular columns, and podcasts featuring interviews with leaders and innovators in the broad field of Geography.  Please consider adding Veryspatial.com to your list of reliable sources of Geospatial news and information and to keep an eye out for Jeff’s’ posts!

Jeff will remain a regular contributer to Outside the Neatline.

From The US Census Bureau Newsroom:

From the US Census Bureau Newsroom:

These data, based on the 2007 North American Industry Classification System, estimate business spending in 2009 for new and used structures and equipment at the sector level, as well as for three-digit and selected four-digit industries. These data are an important input for federal agencies constructing composite national economic measures, such as the Bureau of Economic Analysis’ estimates of private-fixed investment, a major component of gross domestic product; the Bureau of Labor Statistics’ estimates of capital stocks for productivity analysis; and the Federal Reserve Board’s Flow of Funds accounts. The data also provide the business community with a relevant, timely and accurate measure of current business conditions. (Scheduled for release Feb. 10.) Internet address:
http://www.census.gov/econ/aces/xls/2009/full_report.html

A few weeks ago, the University of Connecticut released a new web-based Storrs campus map which utilizes the Google Maps API. This new interface allows you to search by building name, building code, and includes categorical listings of campus buildings. Check out this new map at: http://maps.uconn.edu/ 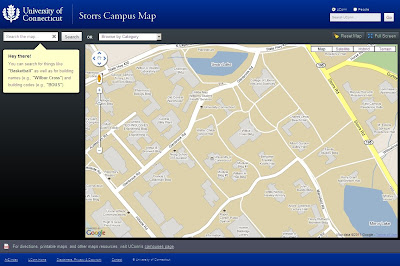 This map was developed by University Communications here at UConn and you can add this map to your website by visiting UConn Webtools page.

The US Census Bureau Released 2010 Census Results for Louisiana, Mississippi, New Jersey and Virginia. Check out the neat interactive map they have provided with county level data!  More states will be available as they are released.
<p>IFRAMES not supported</p>

From the U.S. Census Bureau Newsroom:

The Census Bureau is releasing a preliminary set of April 1, 2010, estimates of total population for the nation, states and Puerto Rico. An Internet table will show the estimates in comparison with official April 1, 2010, Census counts released in December 2010. The estimates are based on the 2000 Census and were prepared using the current estimates methodology without knowledge of 2010 Census results. An additional Internet table will show preliminary estimates of the July 1 populations for each year since the 2000 Census. Internet address: http://www.census.gov/popest/estimates.html