PSI is a global non-governmental organization (NGO) that works to reduce the amount of suffering by people in the developing world due to reproductive health and non-communicable diseases. One research approaches that PSI employs in order to ensure the most effective use of resources is Measuring Access and Performance (MAP). A cornerstone of this approach is to recognize the relationship between the population’s need and the delivery system coverage and quality. This inherently geographic approach uses GIS to determine whether or not supply for services is meeting the demand. PSI is able to do this because of an agreement with the World Health Organization that allows PSI to access data and software crucial to the spatial analysis.

According to this Reuters article, Geospatial Technology has enabled real-time management of electricity in California. What does this entail? For one thing, a control room equipped with “an 80 foot by 6.5 foot screen” to display the power grid in real-time. Software developed by Space-Time Insight, which uses Google Maps as a base map, allows employees at The California Independent System Operator Corporation to manage power supply in addition to determining what source of power will be cheapest for specific locations. One example this article cites is how California ISO was able to divert power flow away from areas affected by wildfires in San Diego in 2008.

Is Geography catalyzing a new “big step” in evolution for the Internet? The authors of this article in Directions Magazine describe how geo-enabling data is an important stepping stone for future growth in what information the web provides.

Check out this article that details a “Crisis Management App” that first responders in Marietta, Georgia use in emergencies. The application, developed with ESRI’s ArcView 10 and Adobe Flex, is designed to be used by non-GIS experts. Although it is designed for easy functionality, the capabilities of the application remain rich. Users (first responders) can add features, such as incidents and roadblocks in addition to accessing imagery and live video stream.

Also, be sure to check out this CNN article that details the growing use of Social Media in times of disaster. Russ Johnson, the director for public safety and homeland security for ESRI, is quoted throughout the article describing how these tools can help emergency resources be deployed more efficiently in time sensitive situations. 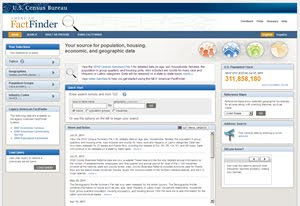 Are you interested in downloading and using 2010 U.S. Census for Connecticut and having trouble using the New American FactFinder? Are you interested in learning more about how to use the New American FactFinder to access data from the 2010 U.S. Census? The Connecticut State Data Center is offering workshops at the University of Connecticut Storrs Campus to provide users with an opportunity to learn more about the New American FactFinder in a hands-on workshop environment. Included below are the upcoming workshops dates/times and registration links:
Workshop Dates:
August 9, 2011 from 10:00am-11:30am
Register at: http://www.lib.uconn.edu/instruction/workshop/#22
August 11, 2011 from 1:00pm-2:30pm
Register at: http://www.lib.uconn.edu/instruction/workshop/#22
August 12, 2011 from 10:00-11:30am
Register at: http://www.lib.uconn.edu/instruction/workshop/#22
These workshops are free and open to the public.
Workshop Location:
Each of these workshops are being held at the University of Connecticut Homer Babbidge Library on the Storrs Campus in Electronic Classroom 2 on Level 2 of the Homer Babbidge Library. Parking is available in South Parking Garage (located just behind the UConn Co-op) and parking costs must be paid in cash upon exiting the garage.
Space is limited so register early and feel free to share this announcement with anyone that may be interested in attending this workshop. Additional sessions of this workshop will be offered over the coming months, so be sure to check the Connecticut State Data Center’s website for the latest events (http://ctsdc.uconn.edu). 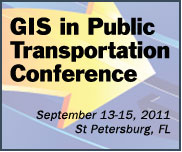 The Urban Regional Information Systems Association (URISA) and the University of South Florida’s National Center for Transit Resarch at the Center for Urban Transportation Research (CUTR) have announced the details to the 2011 GIS in Public Transportation Conference, which is September 13-15, 2011 at the Hilton Bayfront in St. Petersburg, Florida. The conference is still accepting poster submissions.

The June/July 2011 edition of USAID’s Frontlines advocates the use of Geospatial Technology in humanitarian causes. These four articles describe how GIS and Remote Sensing are being applied in the US’ international development efforts:

The Open Geospatial Consortium, a non-profit dedicated to leading the way for standardizing geospatial and location based services, is hosting its 2nd 3D summit September 20, 2011 in Boulder, Colorado. Abstracts for presentations are due Friday, August 12, 2011. Other important dates are as follows:

This is the third in a series of posts on web-based maps developed by the University of Connecticut Libraries Map and Geographic Information Center (MAGIC) for the On The Line project.
Digital maps enable the ability to display dynamic changes to social phenomena in places throughout time. Hartford, throughout the 20th Century, saw dramatic shifts in the racial composition in both the city and county as a whole. Early in the century, the region’s population was predominantly white. During the middle of the century, the region began to diversify. This transformation began in the urban core and moved its way to the suburbs. This is portrayed in On The Line’s Racial Change in the Hartford Region (1900-2010) Animated Time-Slider Map. You can see this progression by simply dragging the time-slider to different years!
Here at MAGIC, we created a series of cartographic layers of Hartford County showing racial distribution based on the decennial census. These layers, from 1900 to 2010, demonstrate two things. The first is the increase of the non-white population in Hartford County throughout the 20th century. The second item, which is less noticeable, is the increasing detail in which the Census Bureau gathered racial data throughout the century. Early in the century, race was distinguished by “White” versus “Non-White” or “Negro”. By 1980, the Census was (and still is) gathering more detailed racial data – by including additional race and ethnicities such as Hispanics and Asians. This map also includes “pop up” labels that include percentages by race and ethnicity and total population figures. These labels can be viewed by clicking on any location on the map.
With support from the National Endowment for the Humanities, MAGIC created this and other interactive maps with Jack Dougherty of Trinity College for the On The Line project. This and other maps are freely accessible in a public history web-book, titled On The Line: How Schooling, Housing, and Civil Rights Shaped Hartford and its Suburbs, which tells the story of schooling and housing boundary lines that have divided metropolitan Hartford, Connecticut over the past century, as well as the struggles of ordinary families and civil rights activists who have sought to cross over, redraw, or erase these lines.
Technical Detail:
The cartographic layers for the Racial Change in the Hartford Region animated time-slider map were created using ESRI’s ArcMap software, then exported as KMZ files using the ArcToolbox conversion tool. To improve the formatting of the individual pop-up balloons, each balloon added custom HTML code to improve the overall display of the data, and then this layer was saved as a KMZ file.
The interactive map utilizes the Google Maps API v3 plus custom javascript code developed by Thomas Bachant and Jean-Pierre Haeberly to create the interface that incorporates each KMZ file by year with a time slider. Each time the time slider is moved, the corresponding KMZ file for that year is added to the map to allow users to visualize the data.
Special Thanks to Thomas Bachant and Jean-Pierre Haeberly for developing the custom javascript code for this map.

How do you provide a more transparent and open government, an educational resource while utilizing emerging technology? The New South Wales government decided to develop an online atlas that includes Economic, Election, Environment, History and Demographic related information. Click here to check out this savy and information rich GIS application that uses Bing as its basemap!