What: Next week, the U.S. Census Bureau will release 2010 Census Demographic Profiles for the District of Columbia, Florida, Kentucky, Maine, Massachusetts, Michigan, Mississippi, New Mexico, North Dakota, Rhode Island, South Carolina, Tennessee and West Virginia. In May, the Census Bureau will provide data for 13 states each week on age and sex distributions, race, Hispanic or Latino origin, household relationship and type, the group quarters population, housing occupancy (including vacancy status) and tenure (whether the housing occupant owns or rents).

Profiles will be available for each of the 50 states, the District of Columbia and Puerto Rico down to the place/functioning minor civil division-level. Profiles for the United States, regions and divisions will be available at the end of May with the final states’ releases.

When: The news release and data for these 13 states will be released Thursday, May 5. The data will be available in American FactFinder <http://www.census.gov>.

I’m pleased to share with you all CLEAR’s spring and summer Geospatial Training Schedule. In addition to our traditional 1-3 day trainings, we are also offering two hour long free webinars that might be of interest to some of you. Please check out our schedule below and let me know if you have any questions. Visit our training website at http://clear.uconn.edu/geospatial. All trainings are taught at the Middlesex County Extension Center in Haddam, CT.

Mashup Madness: Using Google Tools to Create Maps on the Web: May 24 and July 12

This one-day training covers the basics of Google Maps and Google Earth. Topics covered include methods for creating customized maps using Google My Maps, Google Earth, KML and Google Fusion Tables. Participants will also learn methods for collaborative mapping and techniques for embedding interactive maps on a website. No prior GIS experience is necessary.

This two-day training covers the basics of GPS technology. Participants will learn how to use handheld GPS receivers in the field to collect geospatial data and georeferenced photographs. The training also covers methods for integrating GPS data and geolocated photographs into a GIS (MapWindow) and Google Earth. No prior GIS experience is necessary.

Geospatial Technologies at Work: An Introduction to GIS: June 22-24

Register for these and other CLEAR webinars here: http://clear.uconn.edu/webinars/CLEARseries/

This announcement was posted on behalf of our colleagues at CLEAR.

The Harvard Center for Geographic Analysis, together with metaLAB@Harvard, is cosponsoring the 2011 spring conference on *Geospatial Collaboration: New Common Ground*. This two-day conference is open to all. It brings web-mapping experts from across the country to share their knowledge and experience, and to envision what lies ahead in the dazzling field of mapping on the Internet. Speakers will introduce ideas, systems, tools, and visions, and present case studies and discuss challenges. Some will offer live demos and hands-on training. This conference provides a forum for geospatial technologists, developers, academics and end users to engage in dialog and help shape the future of geospatial technology.

On Tuesday April 26, 2011 the U.S. Census Bureau released data on pertaining to the highest level of education completed based on data from 2010. According to this report, among the employed population 25 years of age and older, 37% of women had attained a bachelor’s degree or more as of 2010, compared to 35% of men.

This report is based on data from the tabulations on Educational Attainment in the United States: 2010 and represents the most detailed look ever at years of school completed. Additional data and highlights are available at:
http://www.census.gov/newsroom/releases/archives/education/cb11-72.html

Thursday April 28 at 2 p.m. EDT, the Census Bureau will host a webinar news conference announcing the results of the 2007 Survey of Business Owners data on businesses owned by Asian entrepreneurs. The news conference will be viewable online and on ETV.

The following individuals will be participating in the news conference :

Included below are details on how to participate in this free webinar:

Audio conference ― access information
Toll free number: 1-800-369-6091
Participant passcode: CENSUS
Note: Stay on the line until operator asks for the passcode. Do not key in passcode.

If closed captioning is required: http://livewrite.nccsite.com/view/cb0428

Details on this event are included in the following media advisory:

The Fourth Quarter 2010 Report of the US Census Bureau’s Finances of Selected State and Local Government Employee Retirement Systems is now available.

The U.S Census Bureau’s Finances of Selected State and Local Government Employee Retirement Systems is a quarterly survey that provides national summary data on the revenues, expenditures, and composition of assets of the largest state and local government employee retirement systems. This survey currently consists of a panel of 100 retirement systems, which comprise 89.4 percent of financial activity among such entities, based on the 2007 Census of Governments.
To view this report visit: http://www.census.gov/govs/qpr/ and below are links to the data included in this report. 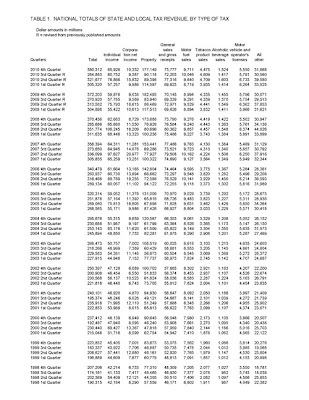 The US Census Bureau has released the Fourth Quarter 2010 Summary of State and Local Taxes. 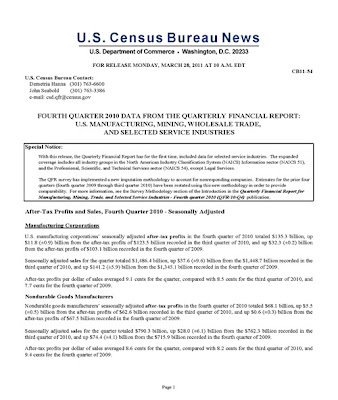 Since 1979, the Census Bureau’s Consumer Expenditure Survey has supplied the nation with household data used to help compute the Consumer Price Index, a key measure of the economy released by the U.S. Bureau of Labor Statistics. In April 2011, the next round of interviews takes place for this quarterly survey. The survey collects information [PDF] on spending for housing, groceries, health care, transportation and other vital goods and services. To see the latest data available and additional details visit: http://www.bls.gov/cex/.

On April 1, 2011, U.S. Census Bureau employees began the first wave of data collection for the National Survey of Fishing, Hunting, and Wildlife-Associated Recreation from about 53,000 households across the country.

Conducted every five years by the Census Bureau, the survey is sponsored by the U.S. Fish and Wildlife Service.

“Participation in this survey is important because the results help us better manage our natural resources and to understand the demands being put on our wildlife and their habitat,” said Robert Groves, director of the Census Bureau. “This is one of the many surveys conducted by the Census Bureau for other federal agencies.”

The information collected for this survey focuses on individuals involved in fishing, hunting and other wildlife-associated recreation, such as observation, photography and feeding.

The latest data from the survey show that in 2006, more than 87 million Americans 16 and older enjoyed some form of wildlife-related recreation and spent $122 billion in pursuit of these activities.

The questions ask in which state these activities occurred and focus on such items as the number of trips taken, duration of trips and expenditures for food, lodging, transportation and equipment. Federal and state agencies use this knowledge for conservation efforts and to maintain areas where we go for outdoor recreational activity.

Preliminary survey findings will be available in summer of 2012. The final national report will be issued in the fall of 2012, followed by a report for each state.

Data collection began on April 1, 2011. Respondents will be surveyed primarily by telephone. Residents will receive a letter from Groves informing them of the survey. All information collected is kept strictly confidential and only statistical totals are published.

The National Survey of Fishing, Hunting, and Wildlife-Associated Recreation has been conducted since 1955 and is one of the oldest and most comprehensive continuing recreation surveys.