The University of Connecticut has acquired a sculpture by Connecticut artist, Gregor Bugaeff, through the generosity of two anonymous donors. The sculpture, executed in chrome and steel, is titled “Arachnid Ballerina Dancing on Lilypads.” Bugaeff joined us on Sunday, September 29th to sign the piece. 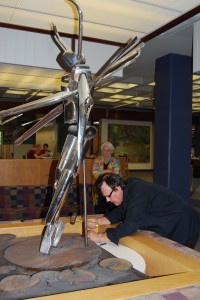 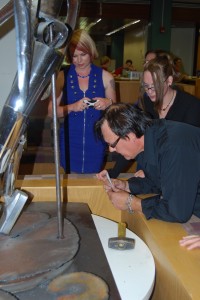 This acquisition was inspired by Bugaeff’s exhibition in the Library during the summer of 2011. Titled “Things That Go Bump in the Night,” his exhibition featured 60 paintings and 13 sculptures of which “Ballerina” was one.

Executed in chrome and steel, “Ballerina” is a reflection of Bugaeff’s theme of metamorphosing found objects into mythological figures and scenes. The piece stands a stately 5’ high and is 3’ in diameter and has been placed on Level B, adjacent to the Norman D. Stevens Gallery in the Homer Babbidge Library.

The Libraries’ exhibition program supports the research, teaching and learning, and public engagement activities of the University. Acquisition of the sculpture underscores the Libraries goal of enriching the intellectual and cultural life of the university community through an active public art program, but also to support the rich cultural resources and artists found in Connecticut.

More information about the Libraries’ exhibition program, including the current exhibits on display, can be found at http://lib.uconn.edu/about/exhibits/

A decade after Puerto Rico became a United States “protectorate” in the 1950s, scores of islanders streamed into New York City. Among them were poets, writers, musicians, and artists who used poetry and prose to question and examine their newfound identity, culture, and history in what became known as the Nuyorican Literary Movement. 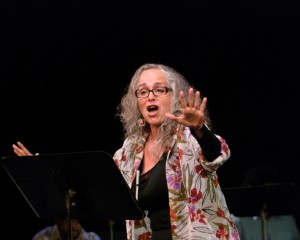 Magdalena Gómez, a figure in that nascent movement, who used her voice to decry the oppression she observed and encouraged the disenfranchised to work to realize their potential, has recently given her personal papers to the UConn Libraries’ Archives & Special Collections in the Thomas J. Dodd Research Center.

“Magdalena Gómez can be considered the quintessential Renaissance woman: poet, playwright, performer, writer, and social activist,” says Marisol Ramos, curator of the Latin American and Caribbean Collections and librarian for Latin American & Caribbean Studies, Latino Studies, Spanish, and Anthropology. “She is committed to Latina/o issues, and the rights of youth, women, and prisoners, as well as human rights as represented in her art, her writings, and her performances.”

Ramos believes the campus community and those well beyond its borders will find Gómez and her personal papers a rich resource.

Says Fany Hannon, director of the Puerto Rican/Latin American Cultural Center, “I’m thrilled the University has acquired the papers and works of a Latina icon like Magdalena Gómez. With negative Latino stereotypes perpetuated in the media, it is both refreshing and empowering to have the positive example of a person who strives to succeed every day. Anyone, regardless of gender, ethnicity, cultural background, or social status, can identify with her work, which is synonymous with activism, community advocacy, and perseverance.”

Gómez began as a performance poet at the age of 17 in New York, and was championed by scores of notable poets, but eventually left the Nuyorican Movement to follow her own path.

For most of her life, both in New York City and, more recently, in Springfield, Mass., she has created her own unique style. She has toured nationally as a motivational speaker and teacher, and with Maria Luisa Arroyo, co-edited a book on bullying, Bullying: Replies, Rebuttals, Confessions, and Catharsis (2012), which gives voice to affected people, from young teens to those in their 80s.

She recently witnessed the off-Broadway production of her work, “Dancing in My Cockroach Killers,” by the Puerto Rican Traveling Theater and Pregones Theater, which opened to considerable acclaim on Sept. 19 and runs through Oct. 13. The production is a selection of her work, adapted and musicalized for theater.

“Magdalena Gómez is a prolific, fierce writer whose work can find a voice in other artistic forms, like theater, music, even dance,” according to veteran performer, theater director, and dramaturge Rosalba Rolon, who directed Gómez’s production in New York.

In addition to her writing, Gómez is the co-founder and artistic director of Teatro V!da, the first Latino theater in the history of Springfield, Mass., started in 2007 with support from the Latino Breakfast Club. She received a National Association of Latino Arts and Culture artist’s grant for her work on anti-bullying initiatives with Teatro V!da in 2010, and was named a Master Artist by National Endowment for the Arts presenters, the Pregones Theater.

Gómez’s connection with UConn began several years ago, when she performed in Hartford with Fred Ho, an American jazz saxophonist, writer, and social activist. History professor and founding director of the Asian American Studies Institute Roger Buckley, who attended the performance, was so struck by Gómez’s poetry that he invited her to speak in his class. During the class, Gómez performed a monologue in which she drew an analogy between the American treatment of Japanese during the war and the physical violence she herself had experienced as a young woman, describing both actions as demonstrating a profound effect on the human condition.

“On the journey to liberation, we must be able to differentiate the essential self from the influences that have formed the cascara or outward shell of who we present to the world,” Gómez says. “Critical thinking and the questioning of authority allows us to embrace the liberating effects of imagination, invites us to honor our intuition, and encourages us to activate an intentional creative practice.”

A special event will celebrate Gómez’s life and career and the arrival of her personal papers in the UConn Libraries’ Archives & Special Collections on Oct. 9 at 4 p.m. in the Student Union Theatre. For additional information, contact Marisol Ramos: Marisol.ramos@uconn.edu, or 860-486-2734

Commuter Appreciation Week contented Wednesday afternoon at the Homer Babbidge Library with “Lunch at the Library,” a casual gathering of commuter students to enjoy a free lunch while receiving some time saving research tips from the library staff. 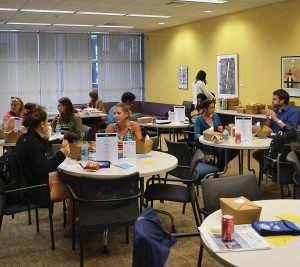 At the engagement, commuter students were greeted and presented with a flash drive containing helpful information about utilizing the library’s various research utilities. Commuters were then invited to grab a sandwich complete with chips, a cookie, an apple and soda.

In lieu of a speaker or PowerPoint presentation, students were encouraged to mingle with each other and approach event staff with questions about library amenities.

This was the second time the library has hosted this event, and the staff was planning for a crowd of approximately 60 students to show up between noon and 2 p.m. However by 12:15, the initial supply of prepared boxed lunches had been depleted. The crowd far exceeded the estimate of 60 that staffers had in mind based on past attendance.

“We increased the amount of food available from last year’s event,” explained Ashley Trotter, the Program Coordinator for Off-Campus Student Services. “We obviously don’t want to run out of food, we even just called catering to bring more over”.

Trotter seemed pleased with the event’s large turn out: “We hold events like these so that commuter students feel appreciated, and to help bridge the disconnect they might feel from living off campus.”

Quite a few of the commuters in attendance were only recently made aware of the event and Commuter Appreciation Week as a whole and were pleasantly surprised.

“I actually didn’t even know UConn had a commuter week until my friend told me she saw a Twitter post,” 7th-semester sports management major Jennifer Gobin said. “I’m definitely going to consider going to the remaining events later in the week now.”

Dawn Cadogan a librarian, discussed the library’s role in the event: “We want our students particularly commuters, to know that we are here for them.”

Indeed, much of the lunch highlighted features of the library that would be particularly useful to commuting students. Cadogan noted that students have the ability to rent iPads, Kindles and laptops for library use and can also rent bicycles at the library to assist students in getting around campus.

Commuter Appreciation Week will continue on Thursday with “Commuter Time Out,” providing commuting students with unlimited free tokens at the Student Union game room and Friday with “Spot the Hippo,” a scavenger hunt around campus. The festivities conclude with free vouchers for popcorn and soda that will be given to commuting students before the weekly Friday night flick at the Student Union Theater.

The University of Connecticut Libraries are among the top resources available for UConn students.

With thousands of books, top-notch electronics, and solitary cubicles, students count on the libraries. Now they have teamed up to bring students various exhibits. The exhibitions can be found in the Homer Babbage library and the Thomas J. Dodd Research Center.

These exhibits are meant to inform and entertain students with well-constructed displays. Reaching students of all kinds is of primary importance, so the exhibitions highlight various subjects. The exhibits are suitable to reach all interest levels and both experts or beginners.

Homer Babbage Library is home to two of three, while the Thomas J. Dodd Research Center houses the third.

The exhibits encourage students and visitors alike to entertain their interests and explore new subjects. There is something for everyone- the cultural, musical and unconventional. First, at Homer Babbage is the exhibit entitled, “Asian Americans at UConn, A 20-year Perspective.” Twenty years ago, UConn established the Asian American Cultural Center and Asian American Studies Institute. The exhibit celebrates members of the Asian American community that have inspired others. It can be seen in the Norma D. Stevens Gallery located in Homer.

Second at Homer Babbage is an exhibit fans of all music styles can enjoy. “Vintage Beatle Guitars” is the title of this collection, and it features guitars previously owned and used by the legendary band. The guitars stand in glass displays, lining the walls as students enter. Students stop and glance throughout the day at guitars that were personally owned by the band. The proud owner of the collection is Beatles die-hard Carlo Cantamessa. He fell in love with guitar and the band when they first appeared on “The Ed Sullivan Show” in 1964. He began taking lessons in Waterbury, Conn. and now plays as John Lennon in several Beatles tribute shows. Highlighted in the display are notable guitars such as George Harrison’s 1966 Gretsch 6122 Country Gentleman, the instrument he used to record “She Loves You.”

The third and final exhibit is located in the Thomas J. Dodd Research Center Gallery. Here, students can see the dramatic evolution of women’s bookworks throughout the years. “A Private and Sensuous Encounter” presents the writings of women artists from 1966 to 2013. Beginning with their emergence on the Fine Press scene, the exhibit shows the increasingly unconventional approach taken by these women. Fine arts and creativity are highlighted in this exhibit. The exhibits opened on Aug. 1, and will be available for viewing until Oct. 25.