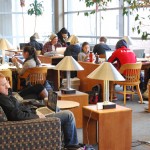 The UConn Libraries’ will open the Homer Babbidge Library for 24/7 hours early this year, starting Monday, December 2nd. Last year we met with the Undergraduate Student Government’s Academic Affairs Committee and they provided feedback indicating that students are as busy, if not busier, the week before finals as they are during finals. So instead of Friday, December 6th, we will open our doors on December 2nd and stay open until Sunday, December 15th at 6pm. That is a total of 330 hours straight. Phew!

Good luck to all UConn students on completing your semester and acing your finals! 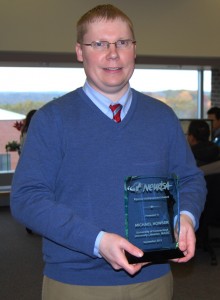 The award is given to an individual who has made a significant contribution that greatly enhances the efficiency and effectiveness of an organization through the use of geospatial or other information technologies.

Michael is the Team Leader for Digital Scholarship and Data Curation and also serves as the Digital Repository Coordinator.  According to NEURISA, he received the award for his work to transform “CT’s Map and Geographic Information Center (MAGIC) over the past five years.  He has had a role in creating a seamless statewide 1934 aerial data set of CT.  He helped to establish the CT State Data Center, a collaboration of academic and state organizations that serve as a liaison to the US Census.  He has helped to digitized a wealth of historical information through a massive scanning and metadata project of over 200,000 documents.  The comprehensive collection of digital GIS datasets available through MAGIC has exploded in the past five years, yet still remains easy to navigate and simple to use.”

This year, 27 authors and illustrators joined together with the University of Connecticut Libraries and the UConn Co-op to create a place where children’s book characters such as Strega Nona and Clifford come to life and inspire children to pursue their passion for reading.

According to Sharon Ristau, the children’s book buyer for the Co-op who has been helping organize the book fair for the past 11 years, the best part is “seeing all the kids get excited about the story characters.”

The kids certainly are excited. Six-year-old Davey, who was proudly “making a space shuttle” at the arts and crafts table, was so excited to be back at the book fair because he “went last year and its such a success.”

Davey’s mother, Thany Litrico, a 2006 UConn graduate from the School of Nursing, said that the event really “helps kids get excited about reading” which is so important for success in school.

A wide variety of books were available for purchase including board books for toddlers, picture books and novels for young adult readers. Many of the authors whose works were featured, were also in attendance and signed books for fans. The authors also gave panel discussions throughout the day aimed at parents and UConn students.

Children were entertained by a menagerie of characters including Stega Nona, Clifford and Spot the Dog. Local volunteers ran a craft station where children could construct and decorate paper crowns.

According to author Robert Forbes, who was joining the book fair for his third year, the event has “tremendous energy.” Even though Connecticut isn’t exactly next door to his home state of Florida, Forbes says he “wouldn’t miss this event for anything.” He believes that helping to interest children in stories and reading as early as possible will only benefit them later in life.

“These kids will all have a leg up in life because their parents read to them,” he said.

The book fair works to inspire children in the realm of literature. Kayla, who has been attending the book fair since she was only a year old, was so excited to be back this year for her 13th time.

“I love listening to the presentations,” she said. “It helps me learn for when I write my stories.”

Adults too can become interested in the world of literature at any time in their lives. Aaron Becker, an author and illustrator who was attending the event for the first time, published his first book “Journey” this summer after working as an artist for film studios in California his entire career. Becker said that he “did not expect so many families” to be attending the event. He thought maybe just a few “bookies” but not the hordes of excited children, parent, and grandparents that were swarming around the tables of books. After seeing such enthusiasm, Becker says he “definitely wants to come back.”

During the duration of the book fair, various panel discussions were held in addition to other children’s literature themed events. Bridging the divide between children’s literature and the university, UConn illustration students were invited to submit work to win the Raab Prize in illustration. The works were created for a poem by children’s author Jane Yolen and were critiqued by author and illustrator Jarrett Krosoczka. Krosoczka critiqued aspects of the illustration such as placement of the text in relation to the art as well as the content of the artist’s work.

Authors presented on a variety of topics, including one called “This is Teen” which focused on teen literature and bringing teenage readers closer to the authors who produce their favorite works. The panel was moderated by author Elizabeth Eulberg, author of “The Lonely Hearts Club” and featured authors Jeff Hirsch, author of “The Eleventh Plague,” Alaya Johnson, author of “Moonshine” and Michael Northrop, author of “Trapped.” All three authors write primarily for teens and contributed in sight on the subject of writing for a teen audience and connecting with teenagers.

“It was fun to meet Alaya,” said Lorraine, 14. “You read the books and you don’t see what the author put into its writing. I liked hearing about how she wrote the book.”