Today the UConn Libraries sends its best wishes to two long standing employees – Terri Goldich and Joe Scott. Both Terri and Joe will retire after 38 years of service to UConn. Yup, we said 38… 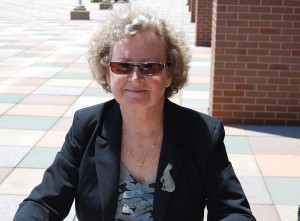 Terri has most recently served as Curator for the Northeast Children’s Literature Collection, contributing to many successes in Archives & Special Collections and in particular the unprecedented growth in the children’s literature collections.

Hired in March 1977 to participate in the Pioneer Valley Union List of Serials cooperative program, the first ever effort for libraries in the region to automate information about serials, Terri soon moved on to other positions in the UConn Libraries, including as the Connecticut List of Serials coordinator and to serve on the reference and information desks. She was among the first staff to inhabit the archives in the newly built Thomas J. Dodd Research Center in 1996.

Terri has played a pivotal role in the prominence and popularity of the Connecticut Children’s Book Fair, becoming Co-Chair in 2006 with Suzy Staubach from the UConn Co-op.

Terri tells us that after a short visit to her daughter Rose, who currently lives and works in Montana, she plans to enroll in the state’s foster parent program. 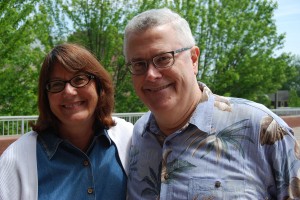 Joe grew up in the shadow of UConn, where his dad taught zoology and physiology. His dad, also Joe Scott, retired in 1976, the year Joe came to work for the libraries. So Joe calculates that next year will be the first year in about 62 years without the service of one or the other of these two Joe Scotts. After graduating from EO Smith High in 1967, he headed for Providence where he earned a degree in music at Brown University, graduating in 1971. He continued on and earned his library degree from Simmons College.

He summarizes his 38 plus years of service at the UConn Libraries in this way:

“I have been pleased to have been a part of several projects, the goals of which were to provide better access to our collections, particularly those of music. These have included reclassification, barcoding, converting to our fully automated library system (until now, with Voyager, although, like me, Voyager has one foot out the door!), bib record enhancement, both locally and for OCLC records. Particularly rewarding to me was the opportunity to serve, in 2008, on the committee that drafted specs for the retrospective and ongoing authority control of our database of catalog records. I’ve been a long-time member of the Music Library Association, its New England Chapter, and the Music OCLC Users group, having served briefly as an officer in the latter two organizations.”

But that hasn’t been all he’s done.  During his personal time, he applied his knowledge of the history of UConn’s School of Fine Arts and, with Dramatic Arts Professor emeritus Bob McDonald, developed a chronology of the school that was used to write and publish a 50th anniversary book of the School’s history.  Their work was lauded by two SFA School deans.  “Without question, this could not have been done without your expertise, your research capabilities and your commitment,” one said in praising his role. Joe extends many thanks for the assistance given with the University Archives by staff at the Dodd Center. Joe notes: “If all goes according to plan, the interactive timeline built from the research we did, will make its debut on the internet within the next day or two.”

We expect Joe will remain very busy in retirement. He is active in choral singing as a baritone (also bass, and occasionally, second tenor). He has sung professionally and currently is a member of Hartford’s Immanuel Congregational Church Chancel Choir, (Joe was also just recnetly made Deacon of the church), the Vernon Chorale, and the Eastern Connecticut Symphony Chorus. Joe is fond of quoting the title of a hymn, “How can I keep from singing?” Retirement plans include trips to Rhode Island beaches, reading the history of World War II and learning about how his father and an uncle served, road trips to NCAA Women’s Basketball Final Fours, and to national conventions of the American Choral Directors Association and the Barbershop Harmony Society.

Best wishes to you both from all of the staff at the UConn Libraries as you embark on writing the next chapter in your lives.

The Libraries recently decided to discontinue offering users the ability to access our full-text journals via the mobile app BrowZine, which was being piloted this past year. While the BrowZine app is free to users, the library incurs a cost in making our content available and the low usage statistics gathered does not justify that cost.

It is always a difficult decision to limit access to our resources. As stewards of our collections, it is important to ensure that we are providing the right balance of scholarly resources available to faculty, staff and students. As we continue to face difficult financial times, we are steadfast in our commitment to consider cost vs. use for all the services we offer. In this case, we believe based on relatively low usage statistics it is more important to keep access to the full-text resources, rather than supporting this additional form of access.

Please note that UConn’s journals will no longer be accessible via BrowZine as of June 30, 2015.  Users will continue to be able to access full-text resources through our website. If you use BrowZine to read open access journal articles, that will still be available to you.

If you have any questions or concerns, please contact ermsupport@lib.uconn.edu.