The 2010 data was released on 3/9/2011 at 2:00pm and we are still enhancing this mapping interface and we welcome your feedback! Check out this interactive map by visiting the Connecticut State Data Center’s website and click on the Maps link or click the image below 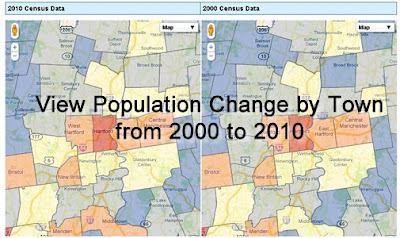 ﻿Today (Tuesday March 8, 2011), the Census Bureau shipped local 2010 Census data to the governor and leadership of the state legislature in Connecticut. After confirmation of receipt, usually within 24 hours of shipment, the Census Bureau will issue a news release with five custom tables of data for the state. Wednesday’s release is expected around 2 p.m. EST. At that time, the full set of data will be available via FTP download at http://www2.census.gov/census_2010/01-Redistricting_File–PL_94-171/. Within 24 hours after release, the data will be posted on the Census Bureau’s new American FactFinder site http://factfinder2.census.gov.

The data will include summaries of:

Data will be available for multiple geographies within the state, such as census blocks, tracts, voting districts, cities, counties and school districts.

Next week (March 7-11, 2011), the U.S. Census Bureau anticipates releasing local-level 2010 Census population counts for Connecticut. This data released by the Census Bureau will provide summaries of:

This data will be released for multiple geographies within the state, such as census blocks, tracts, voting districts, cities, counties and school districts.

According to Public Law 94-171, the Census Bureau must provide redistricting data to the 50 states no later than April 1 of the year following the census. As a result, the Census Bureau is delivering the data state-by-state on a flow basis in February and March. All states will receive their data by April 1, 2011.
When will this data be released?
Each state’s geographic products and redistricting data are first delivered to the state’s leadership, such as the governor and majority and minority leaders in the state legislative body. Upon confirmation of delivery to the state leadership, the US Census Bureau will release a news release with five custom tables of data. Within 24 hours, the full set of five detailed tables will be available to the public online via the American FactFinder.
For more information on the Census Bureau’s Redistricting Data Program, visit http://www.census.gov/rdo/.

ESRI, one of the leading GIS software companies, has just announced a series of internship opportunities for Summer 2011. Included below are details on these internships: